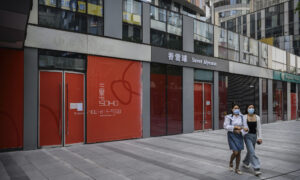 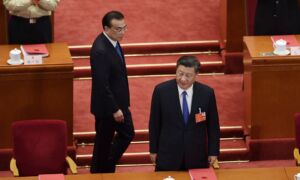 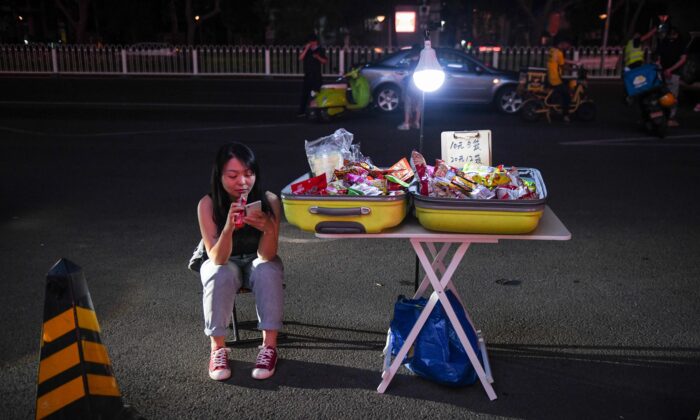 A street vendor waits for customers on the roadside outside a shopping mall in Beijing on June 10, 2020. (GREG BAKER/AFP via Getty Images)
China Business & Economy

Chinese state-run media recently have published commentaries encouraging young people to move to rural areas, since there aren’t enough jobs in the cities as a result of the COVID-19 pandemic’s economic impact. But rural farmers also can’t find enough work.

The Chinese regime also is promoting a plan to encourage domestic consumption, called the “domestic economic circulation”: Faced with a lack of export orders due to the pandemic, China should set up industrial supply chains to produce goods that Chinese people are interested in buying.

No Work in Rural Areas

“On my way here, I saw a lot of empty factory workshops along the roads. I think our local government should encourage enterprises to use them for expanding production,” Li said, while touring the Beiyitong factory in Tongren city on July 6, according to local government reports.

Many migrant workers lost their city jobs during the CCP virus pandemic. Without a source of income, many have returned to their hometown villages.

However, as local authorities allocate equal plots of land to each household, rural families have long experienced the dilemma of not having enough land to make a living.

By the end of 2019, China had 290.77 million migrant workers, according to China’s National Bureau of Statistics. But because they’re not officially registered in the urban areas where they work, they’re unlikely to be counted in authorities’ unemployment data.

No Jobs in the Cities

The Chinese regime announced that the official unemployment rate in cities in May was 5.9 percent, although Chinese residents and economists are skeptical of that number.

In April, Chinese economist Li Xunlei and his team posted online that according to their research, the national unemployment rate should be counted as 20.5 percent, which means more than 70 million people have lost jobs. After the research created a heated public debate, Li was forced to resign from his position as director of the brokerage firm Zhongtai Securities.

In May and June, overseas Chinese media and English-language media quoted Chinese economists (who wished to remain anonymous) that 80 million Chinese were searching for jobs in the cities.

Zhou Li, a senior economist and former vice minister of the International Liaison Department of CCP’s Central Committee, published an article on June 22 citing the enormous challenges the country was facing.

“Since the pandemic spread around the world, China’s export businesses have received very few orders. Their suppliers and buyers shut down production, and international transport has clogged up,” Zhou wrote in the article, which was published on the state-run China Social Science News. “This has created enormous pressure on China’s economy and employment.”

On top of the economic challenges, Zhou wrote that China also faced a deteriorating U.S.–China relationship, an ongoing CCP virus epidemic, international transactions that rely on the U.S. dollar, and a shortage of grain supplies.

Locals are feeling the brunt of the economic losses. Zhou Na, a resident in eastern China’s port city of Qingdao, said the many export-focused factories in the area are suffering.

“[Manufacturing] towels, shoes, hats, clothes … almost all my friends who work in these businesses have no work to do now,” she told The Epoch Times in a phone interview.

Zhou added that many locals can no longer afford to eat out.

“Almost no one eats at restaurants because the dishes there are expensive. The street food vendors have lots of customers because they’re cheap. People don’t have jobs and don’t have money. This year has been very tough for us,” she said.

State-run newspaper People’s Daily published a commentary on July 6 to encourage the 8.74 million students who graduate from a university this month to “go to rural areas, where the country needs you eagerly.”

That’s the same slogan the regime used during the “Down to the Countryside Movement” campaign during the 1960s and early 1970s.

The commentary encouraged them “to become teachers, farmers, and doctors in rural areas, and to go to the poor regions [where] there is broader career development.”

Vice Premier Liu He, the Chinese Communist Party’s top official for economic policy, proposed a plan to revive the economy during the Lujiazui economic forum in Shanghai on June 18.

“We [China] are still facing quite enormous pressure from the economic downturn. … Our economic system is forming a new pattern, which is to mainly rely on domestic circulation,” while still relying on international trade, he said.

Liu asked people to pay more attention to the integrity of the industrial chain—as the current Chinese economy relies on exports and foreign suppliers, and said that local industries should create more demand for domestic-made goods.

According to China’s General Administration of Customs, China exported a total value of 6.2 trillion yuan ($885 billion) in the first five months in 2020, while it imported 5.3 trillion yuan ($762 billion)—4.7 percent and 5.2 percent less, respectively, than the same period last year.