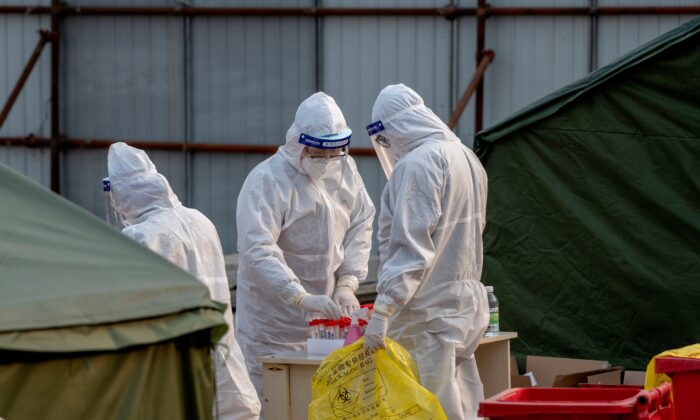 The latest round of the COVID-19 outbreak in China’s capital Beijing is spreading rapidly, with cases popping up in more districts. A local hospital was locked down, and hundreds of residents were urgently relocated for quarantine. The Epoch Times spoke with some Beijing residents who expressed frustration over the government’s handling of the situation and the recent spike in food prices.

During a press briefing on the epidemic situation in Beijing on Jan. 25, authorities reported that five new cases were confirmed the day before, including one in Xicheng district, located in the city center, according to Chinese news portal Sohu.

Due to Chinese authorities’ past record of underreporting infections and covering up information, it is difficult to assess the true scale of the current CCP (Chinese Communist Party) virus outbreak.

At the press conference, local authorities from Daxing district said that residents are required to stock up on three days’ worth of food and supplies, but said they would be limited to one order per day. They should also avoid buying in large quantities in a single transaction, authorities said. Residents who are self-quarantined at home usually get their groceries and supplies from community workers. But lately, many community workers have also been confined to their homes.

Also on Jan. 25, Beijing Nanjiao Cancer Hospital in Daxing district, a hotspot of the latest COVID-19 outbreak in Beijing, announced that the hospital suspended all outpatient services and stopped admitting new patients for hospitalization. Administrators confirmed that the CCP virus was detected on two samples from the hospital’s garbage truck after nucleic acid testing on Jan. 23, Chinese news media Sina reported.

The hospital is about 6 miles away from the residential community where infected cases were detected last week.

Meanwhile, the CCP virus has also spread to the Zhongguancun area, which is known as China’s Silicon Valley, in Beijing’s Haidian district. NetEase Inc., a big Chinese internet company that owns a major Chinese news portal and online service website 163.com, announced on Jan. 22 that one employee tested positive for COVID-19, whose roommate is a close contact of a confirmed patient in Daxing district, Sohu reported.

People working at the same NetEase office building in Zhongguancun are under quarantine at home until Jan. 31, state-run meda China Daily reported on Jan. 23.

However, a NetEase employee told The Epoch Times on Jan. 23, “We are all sealed inside the office building now and cannot get out.” Others expressed the concern that such centralized isolation makes it easier for the virus to spread among staff.

A Daxing resident who has been evacuated from his home and placed into quarantine centers—along with hundreds of other locals—told The Epoch Times that many problems occurred during the relocation and quarantine process, and people are frustrated with the government’s handling of the situation.

A resident from Daxing’s Tiangongyuan Huirong community, surnamed Li, said that the local government’s epidemic prevention measures are very rigid. As long as there is a confirmed case in a building, all residents must be sent to other places for quarantine, regardless of whether or not they were in close contact with the infected person.

Moreover, Li is very concerned that local authorities did not separate people during the relocation process; people residing in the units that have confirmed cases were mixed in with the others. All residents were queuing in the same line as they waited to board the buses. And there was no space or separation between seats on the buses to maintain social distance.

More than 100 people from Li’s building unit are being quarantined at Fangshan Art House Hotel, located in the outskirts of Beijing in Fangshan district.

Li said that the meals provided at the quarantine site are always cold. They’ve stayed in the hotel for two consecutive days, and many people, including himself, reported that they felt dizzy because they’re not getting enough oxygen and fresh air.

Li said that some of the windows did not open to the outside. Instead, they opened to a lobby with a glass ceiling, which was closed off.

Li also said that authorities have not told them when they can return home and how long the quarantine period will last. Everyone is waiting around nervously.

He expressed his frustration, “This time we are completely distrustful of the Daxing government, the capital’s epidemic prevention and control capabilities, and the government, and we are so disappointed!”

Beijing is surrounded by Hebei, the province hardest-hit by COVID-19 this year. The highways connecting Hebei to Beijing were closed in order to prevent the virus from spreading to the capital city.

A Beijing resident surnamed Wu told this publication that Beijing’s food supply mainly comes from Hebei and Shandong provinces. “Now Hebei is basically locked down. And some places in Beijing have been closed and food cannot be brought in. Vegetables from Shandong can still come into some places, but there will be less and less in the future.”

She observed that the prices of meat, eggs, and green vegetables in Beijing are now rising sharply. “Eggs used to cost more than eight yuan (about $1.20) a kilo, but now they have jumped up to 14 yuan (about $2.10). Prices for vegetables have doubled. The price of pork has gone up even more. The best pork quality before the African swine fever was more than twenty yuan (about $3) a kilo, and now it is eighty yuan (about $12).”