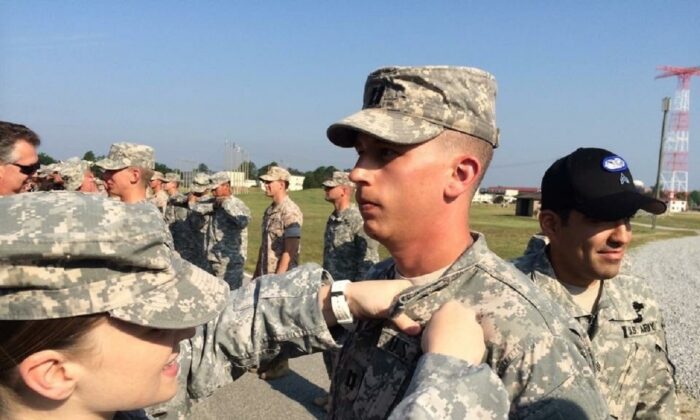 A U.S. Army officer was deemed a possible threat, according to newly disclosed emails.

Maj. Samuel Sigoloff, a doctor, was ordered to stop seeing patients earlier this year after granting exemptions to the military’s COVID-19 vaccine mandate. Sigoloff has attempted to leave the force but the Army has refused to process his resignation, according to his lawyer.

On Aug. 1, Sigoloff was sent an email from David Prince, a plans officer at Fort Huachuca in Arizona. Four other officers were also sent the message.

“ALCON, Here is some information on the subject of tomorrow’s Threat Working Group,” Prince wrote.

The subject was Sigoloff, according to the missive, which was reviewed by The Epoch Times.

“Why are they having a meeting about a doctor being a ‘threat’ when he’s not made any threats? That doesn’t make any sense,” Sean Timmons of Tully Rinckey, who is representing the major, told The Epoch Times.

Timmons thinks the message was meant to signal to Sigoloff that the military is focusing on him for what he’s done.

“They’ve been so frustrated by his exposure of the corruption that they’re now engaged in Hail Mary desperation and reprisal through intimidation,” he said.

A spokeswoman for Fort Huachuca told The Epoch Times in an email: “In an abundance of concern, the U.S. Army frequently assesses situations in order to ensure the health and welfare of its Soldiers, families and team members. At this time Maj. Sigoloff has not been deemed a threat.”

Asked what situation arose in this instance, she said that Sigoloff “is under a lot of stress.”

Prince did not respond to a request for comment.

Sigoloff responded to Prince and the others, telling them that he needed more information about the meeting in order to attend.

“I will be standing by for the time and place. Thank you for the invite,” he wrote.

Frederick Ubungen, another officer, said that the meeting would be at a certain building but indicated it might not happen because a key participant in the threat group was traveling.

“I must not have been on the email that said the meeting was going to be rescheduled. Please let me know when the new meeting will take place so that I can help. In the meantime I would be happy to answer questions. I, like you, always want to help uphold our oath to protect the Constitution,” Sigoloff later wrote to the group.

Timmons said he spoke with a person at the base who said that when the meeting was being set up, Prince likely inserted Sigoloff’s email to make sure he was spelling Sigoloff’s name correctly, and forgot to remove it before he clicked send.

“That doesn’t pass the smell test to me,” Timmons said. He believes what has unfolded is illegal, since Sigoloff has served in a whistleblower capacity for Sen. Ron Johnson (R-Wis.).

The fort spokeswoman said it was unclear whether the meeting was ultimately held and whether Sigoloff was intentionally included in the message.

Update: This story has been updated with comments from the fort spokeswoman.