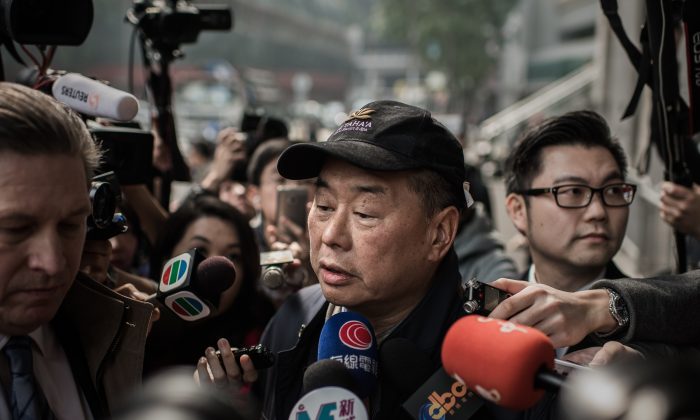 Lai, the founder of Next Media—one of Hong Kong’s largest media companies—and Apple Daily showed up at police headquarters on Wednesday, 9:00 a.m. local time (8:00 p.m. Eastern Standard time, Tuesday) to turn himself in.

About a fortnight ago, the police identified 32 key Umbrella Movement protest figures, charged them with “inciting an illegal assembly” over the phone, and scheduled dates for them to surrender and “assist investigations” at their HQ in Wan Chai or face home arrest.

Protesters dubbed the police move, “arrest appointments,” and claimed that they are victims of political prosecution.

Upon reporting to the police, the protesters were held for a few hours, shown news clips of their involvement in the street protests, and asked some questions. All were released without charge after refusing to post bail.

Speaking to reporters outside the police HQ about two hours after he entered the building, Lai said he encountered “no issues” during his “arrest appointment,” Apple Daily reports.

The staunch Beijing critic and pro-democracy supporter added that he has “no idea” if police are planning follow-up action when asked by the press, but said that police can summon him again at any time.

Other protesters had seized the media attention to voice their views and concerns.

Prominent protest teen Joshua Wong, who reported to police on Friday, vowed that there would be more Umbrella Movement protests ahead, and that arrests would only “motivate more of the secondary school or university students to come to the street and join the action.”

The authorities, however, beg to differ.

Hong Kong’s security secretary Lai Tung-kwok (no relation to Jimmy Lai) said in a legislature session Wednesday that the protesters were released “after refusing to post bail,” not “released from bail.” This nuance, Lai says, means that police can still prosecute the protesters in future after gathering more evidence.

Meanwhile, police could be planning more “arrest appointments” in the near future.

In all, about 1,500 people could be prosecuted for partaking in pro-democracy protests last year.