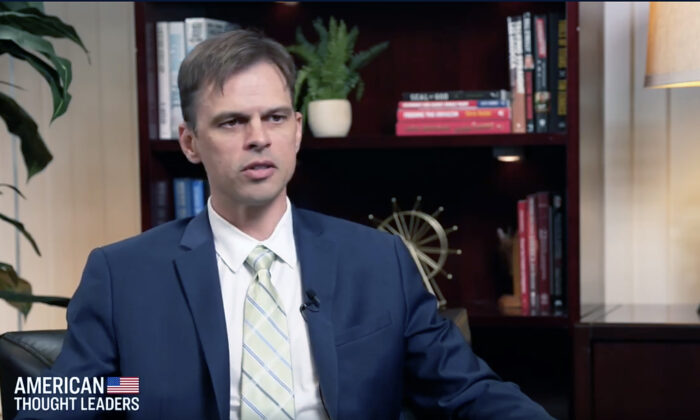 Americans Should Put a Stop to the ‘Biomedical Security State’: Dr. Aaron Kheriaty

“This welding of public health with digital technologies of surveillance and control and the police powers of the state allows for intrusions on our privacy, on our bodily autonomy, that are unprecedented in history,” said Kheriaty, a psychiatrist and medical ethicist.

Dr. Aaron Kheriaty on the Rise of the Biomedical Security State: The Merger of Public Health, Surveillance Tech, and Policing Powers

Kheriaty, chief of medical ethics at the Unity Project and fellow at the Ethics and Public Policy Center, added that a “probably north of 70 percent of Americans still got COVID in spite of almost a year of lockdowns,” and that the lockdowns have essentially brought on “massive collateral damage” in the form of a mental health crisis.

He cited the pre-pandemic opioid crisis accounting for a total of 70,630 drug overdose deaths in 2019 in the United States, according to the CDC (Centers for Disease Control and Prevention.) The lockdown has only “poured gasoline on [the] fire” of the existing drug overdose crisis, resulting in the skyrocketing of drug overdose deaths to over 100,000 last year, said Kheriaty.

An August 2021 study published on Pub Med found that “state lockdown policies precede greater mental health symptoms,” and that many “non-heavy drinkers” turned to alcohol during lockdowns as a coping mechanism for “anxiety and depressive symptoms.”

The results may warn against “greater addiction following the pandemic warranting further investigation into utilization of substance use treatment,” the study reported.

Furthermore, one insurance company has reported a 40 percent rise in death rates during the third quarter of 2021 compared to pre-pandemic rates, which is the highest rate the company has ever seen.

J. Scott Davison, CEO of insurance company OneAmerica, said during a news conference in December 2021 that the deaths of working-age people between 18 and 64 years of age are on the rise, and are being consistently seen in all insurance companies offering life insurance.

“Just to give you an idea of how bad that is, a one-in-200-year catastrophe would be a 10 percent increase over pre-pandemic,” Davison said during a health care conference organized by the Indiana Chamber of Commerce in December 2021.

Given that 2021 was the year a “mass vaccination campaign” was implemented and that the 18–64 year age group has relatively low COVID-19 mortality rates compared with the over 65 age group, Kheriaty said that “we ought to be very concerned” and dig deeper into whether the deaths were the “effects of the lockdowns that were emerging the following year,” or whether the deaths were due to “vaccine adverse events that may have gone unreported or under-reported,” or a combination of those factors and others that require further investigating.

“This is a very pressing question that public health authorities need to contend with,” Kheriaty said.

“Estimated numbers of deaths due to these other causes of death could represent misclassified COVID-19 deaths, or potentially could be indirectly related to COVID-19 (e.g., deaths from other causes occurring in the context of health care shortages or overburdened health care systems),” the CDC stated.

“For the majority of deaths where COVID-19 is reported on the death certificate, COVID-19 is selected as the underlying cause of death,” the CDC added on its website.

However, the New York Times had recently reported that the CDC still had not published large amounts of the data they collected during the pandemic.

In comments to The New York Times, a CDC spokesperson said the data were “not yet ready for prime time,” that the information may be misinterpreted to mean the vaccines are ineffective, and that the data they have is based on 10 percent of the U.S. population, which the Times pointed out is the same sample size used to track influenza each year.

Kheriaty pointed out that there appears to be a “conflict of interest” within the CDC, whereby “rather than releasing the data that American taxpayers have paid for and obviously have the right to see, and independent researchers have the right to scrutinize, they’re keeping that information from the public, because they think it may be harmful to some of the recommendations that they’ve made.”

He added that there should be a stronger “firewall” between the scientific and political department of an organization such as the CDC to allow for more transparency, otherwise “you end up in a situation in which you have the control of information and basically, giving people only the information that you want them to hear in order to do what you want them to do,” which is essentially propaganda characteristic of “totalitarian regimes.”

The first step in allowing the “separation of legislative, judicial and executive powers” to resume normalcy, is to put a stop to the state of emergency declared at the start of the pandemic, Kheriaty stated, adding that Americans need to “demand and take back” their “right of informed consent and the right of informed refusal.”

The state of emergency declaration enables the CDC and other health agencies to take certain actions, including tapping into financial reserves and waiving some requirements from the Health Insurance Portability and Accountability Act. In a pandemic-era bill, Congress also ordered all laboratories that perform or analyze COVID-19 tests to report the results to the federal government until the declaration ends.

In a March 16 email statement to The Epoch Times, a CDC spokesperson stated that it has “no general statutory authority to direct what and how public health data are reported. Data authorities related to COVID-19 test results and hospitalizations are available now because of a public health emergency declaration. When that declaration lapses, so do the federal legal authorities to require the reporting of this important information.”

Joseph Mercola and Zachary Stieber contributed to this report.