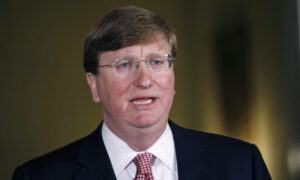 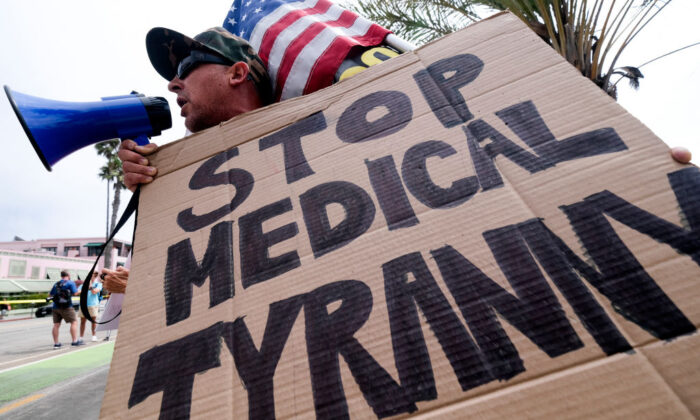 A protester holds a sign and a flag as he takes part in a rally against COVID-19 vaccine mandates, in Santa Monica, Calif., on Aug. 29, 2021. (Ringo Chiu/AFP via Getty Images)
Regional & Local News

If an individual was injured by an employer-mandated COVID-19 vaccine, a proposed Alabama bill will give the employee the right to take legal action against their employer.

Part of Biden’s requirements is mandating private companies with 100 or more employees to have staff vaccinated or tested weekly for the CCP (Chinese Communist Party) virus, commonly known as the novel coronavirus, the pathogen that causes COVID-19.

After Biden’s speech, Hanes said he now plans to revise the bill or draft a new version with a clause that protects the employer as well.

If the current bill were to pass, it would put the employer in the position of consequentially violating federal law by adhering to state law.

The bill states that an employee and his or her dependents have “private right-of-action against an employer for any adverse reaction, injury, temporary or permanent disability, or death” as a result of the COVID-19 vaccine mandated by the employer.

What prompted the idea for the bill, Hanes said, was hearing a legal opinion claiming that, because Alabama is an “at-will” state, the employer can mandate vaccines for the employee. An at-will state means an employer can fire an employee at any time.

“This bill is about individual liberties,” Hanes said. “Even though we are an at-will state, that only goes so far. It doesn’t mean the employer owns you.”

The premise of a vaccine mandate, Hanes said, is based on a notion of ownership.

“It’s like my dog: if my dog could talk and say, ‘no, I don’t want the rabies vaccine,’ well, she doesn’t have anything to say about that because I own her,” Hanes said.

An employee, Hanes said, is an individual business.

“Employees sell their time and labor to that employer because they need to purchase that from them,” Hanes said. “Employees really work for themselves. Once a man or a woman gives a fair day’s work for a fair day’s wage, then they have fulfilled their end of the bargain.”

On Biden’s vaccine mandate speech, Hanes referred to the balance of power between the federal government and the states.

He added that the Tenth Amendment and the Anti-Commandeering Doctrine were established to limit federal overreach, which has been the winning argument in several cases in the U.S. Supreme Court that have overturned federal law “on numerous occasions.”

Alabama is one of 27 states with Republican governors or attorney generals who have stated that they will fight Biden’s executive order.

In a statement on the mandate, Alabama Attorney General Steve Marshall said the state of Alabama will sue to block the order.

“The vaccine mandate is unprecedented in its audacity and unlawful in its application,” Marshall said. “The Biden administration knows this full and well.”