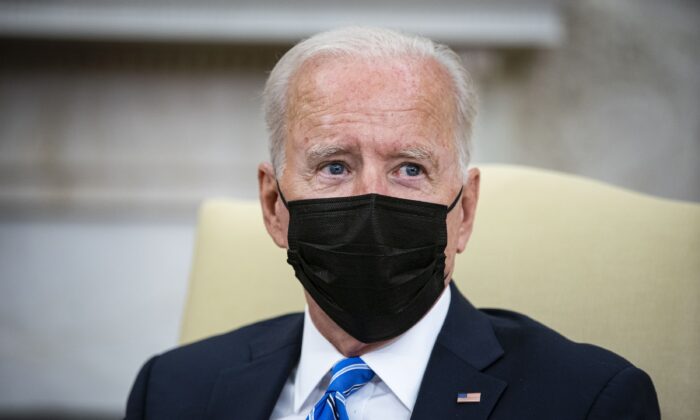 President Joe Biden is seen during a meeting with British Prime Minister Boris Johnson in the Oval Office of the White House in Washington on Sept. 21, 2021. (Al Drago/Pool/Getty Images)
US News

A group of federal workers and contractors filed a lawsuit against the U.S. government over COVID-19 vaccination mandates that were announced earlier this month by President Joe Biden.

The lawsuit, filed Thursday in Washington district court, is asking a court to declare unlawful Biden’s executive order and a Department of Defense memorandum in August mandating all military members get the vaccine.

Lawyers argue that members of the Christian faith are required “to refuse a medical intervention, including a vaccination, if his or her informed conscience comes to this sure judgment,” and it further stipulates that “naturally acquired immunity provides greater protection than vaccines.”

One of the plaintiffs, U.S. Foreign Service Officer Daniel Jackson has a faith that “also instructs him that vaccination is not morally obligatory in principle and therefore must be voluntary” and that there is “a general moral duty to refuse the use of medical products, including certain vaccines, that are produced using human cells lines derived from direct abortions.”

Another plaintiff was identified as Secret Service agent Lionel Klein. The lawsuit stipulates that because Klein had already contracted COVID-19 and survived, he has enough antibodies to ward against future infection and doesn’t need the vaccine.

“The human body knows how to develop immunity to new viruses. The adaptive immune system consists of an enormously diverse repertoire of B cells—precursors of antibody-secreting plasma cells—and T cells with a nearly unlimited capacity to recognize and ‘adapt’ to previously unseen pathogens,” the suit reads.

The lawsuit also lists federal contractor Zachary Amigone, who works for 3M, as a plaintiff and says he has “a personal and family history of severe vaccine reactions and has been determined to be medically exempt from vaccination by a licensed physician.”

At the same time, the president unveiled a plan that would direct the Occupational Safety and Health Administration, or OSHA, to potentially fine private businesses with 100 employees or more to compel their workers to either get vaccinated or submit to weekly testing. Several GOP-led states have threatened to file lawsuits over the mandate, while Arizona on Sept. 14 became the first to sue the administration over the plan.