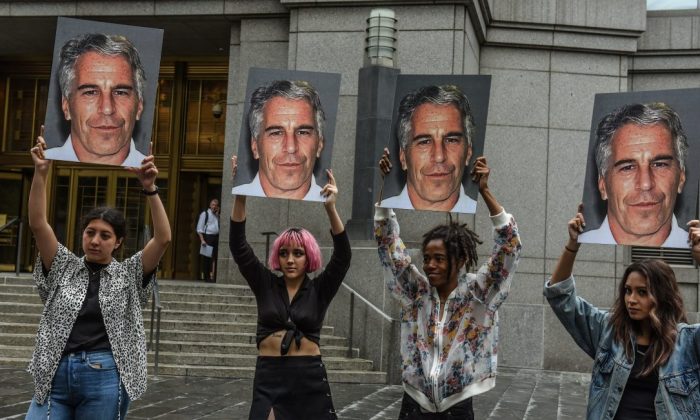 A protest group called “Hot Mess” hold up signs of Jeffrey Epstein in front of the federal courthouse in New York City on July 8, 2019. (Stephanie Keith/Getty Images)
Crime and Incidents

While touting the conviction of sex trafficker Ghislaine Maxwell as a “victory for survivors,” the National Center on Sexual Exploitation (NCOSE) has launched a petition for the Department of Justice (DOJ) to prosecute the many suspected clients and co-conspirators who participated in Maxwell and Jeffrey Epstein’s notorious pedophile ring.

Maxwell was found guilty on Dec. 29, 2021, of five charges related to her role in Epstein’s sex-trafficking network. The list of her and Epstein’s alleged clients is a who’s who of global power brokers, from Prince Andrew to former Israeli Prime Minister Ehud Barak and billionaire Leon Black; the men have denied the claim.

NCOSE and sexual abuse survivors want the DOJ to investigate the credible claims made against those men and so many others.

“Without a network of eager exploiters—who are also sex traffickers under federal law—the scheme would not have continued for as long as it did. … And the Epstein-Maxwell sex trafficking scheme was not an isolated incident,” the petition states. “The Department of Justice should create a cross-jurisdictional task force to investigate, identify, and prosecute all perpetrators engaging in similar conduct as Epstein and Maxwell.”

By all accounts, prosecutors have ample evidence with which to pursue Epstein and Maxwell’s suspected clients—including survivors willing to testify, as well as reams of contemporaneous records from over the last two decades of Maxwell’s and Epstein’s activities.

NCOSE Vice President Eleanor Gaetan said prosecutors also have the legal tools to pursue Maxwell’s alleged clients, noting that Congress passed the Victims of Trafficking and Violence Protection Act in 2000, which defines sex trafficking to include the solicitation of a person for the purpose of a commercial sex act.

“This means that with the Maxwell case, there was an invisible party to the crime: those that solicit or patronize. Where NCOSE is concerned, the attention to Maxwell and Epstein is obscuring what drove this crime. And that is those that were party to it,” Gaetan told The Epoch Times. “Without those eager exploiters, this scheme would not have gone on for as long as it did.”

Not all survivors or advocates have hope that the DOJ will pursue Maxwell’s clients. Nick Bryant—who obtained and eventually had published Epstein’s infamous black book—told The Epoch Times in December that the government’s handling of the Maxwell case is an “abomination of justice.”

“She should be indicted on scores of child-trafficking counts. But she’s only indicted on one, which shows me that this is a coverup,” Bryant said.

While the Maxwell-Epstein scandal has been a wildly popular topic online across the political spectrum, government officials and politicians have been largely silent on the controversies surrounding how the DOJ has handled the investigation and prosecution. One of the few to speak out following the Maxwell verdict was Rep. Marjorie Taylor Greene (R-Ga.)—she said on Twitter that Epstein’s “entire network should be made public and his fortune should go to his victims.” She has since been booted from Twitter for comments about COVID-19.

But despite the apparent uphill battle, Gaetan said she’s optimistic that the Maxwell-Epstein network will eventually be brought to justice.

“We’re convinced that this is the beginning of justice, not the end,” she said.

Gaetan pointed out that it took decades for Maxwell to be prosecuted. Even though many may question the government’s handling of the Maxwell-Epstein investigations, Gaetan said their arrests still marked a major step in the right direction.

“There was a lot of spin around the trial, but at the end of the day, Maxwell was found guilty—she’s a pimp,” Gaetan said. “She may not be your stereotypical pimp, but she is absolutely a pimp. She procured, solicited, and groomed women for Jeffrey Epstein and his friends.”