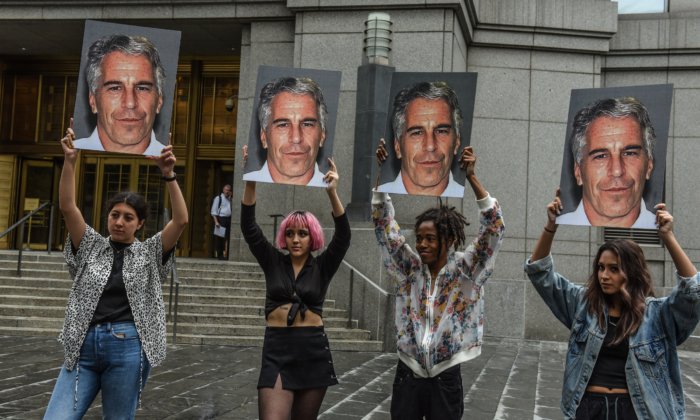 An Israeli tech firm that sells security products in the United States claimed to cut ties with its chairman, former Israeli Prime Minister Ehud Barak, following revelations of his close ties to deceased multimillionaire sex offender Jeffrey Epstein—although records indicate Barak may still have a stake in the company.

The company in question is Carbyne Ltd., an Israeli tech vendor that offers services to governments in the United States, Mexico, Brazil, Ukraine, and the Philippines. Carbyne sells software to police departments and other government agencies that allows them to access callers’ smartphones during emergencies.

Founded in 2014, Carbyne has made a big splash in the U.S. security industry by forming business relationships with high-profile figures such as former CIA Director Gen. David Petraeus and U.S. billionaire Peter Thiel. As Congress considers including some $500 million in subsidies for 911 emergency call center updates in its infrastructure bill, Carbyne has hired a Washington lobbyist in an apparent drive to expand.

But Carbyne has also received negative attention for its ties to Barak and Epstein. The company has distanced itself from the two.

Following numerous reports detailing the connections between Epstein and Barak—including an initial story from the Israeli newspaper Haaretz about the two having invested in Carbyne together—Carbyne announced in April 2020 that the former Israeli prime minister was stepping down as chairman of the company.

“In addition to Mr. Barak’s resignation from the Board, all shares owned by Mr. Barak’s Sum (E.B) LLP are being moved to IBI and will be sold in the coming weeks to a new investor who has been identified,” Carbyne stated in a press release.

However, records indicate that Barak, who has been accused of rape by Epstein victim Virginia Roberts Giuffre, still has ties with Carbyne. The UK public companies registry states that Barak is a “person with significant control” of Carbyne’s UK entity; in July, Barak provided the registry with a new service address in his capacity as a Carbyne shareholder.

The registry is supposed to be updated regularly by the government, and its record is the basis for believing Barak has, at least as recently as July, had ties to Carbyne.

When contacted by The Epoch Times, Carbyne initially said Barak is “no longer with Carbyne.” But when presented with the UK company records, Carbyne didn’t answer follow-up questions. Barak couldn’t be reached for comment.

Carbyne also declined to comment on follow-up questions about its reported connections to Epstein. Company officials initially denied the Haaretz report when contacted by The Epoch Times, saying that “Carbyne has never received money from Jeffery Epstein or had any type of communication with him.”

But the Israeli firm stopped responding when asked about a March 2020 article from Forbes, which cited Carbyne co-founder and current CEO Amir Elichai conceding that Epstein had a 5 percent stake in his firm.

“None of the founders or the executive management of the company were aware of him investing,” Elichai told Forbes. “We never spoke with him, never talked with him, never knew that he was part of anything related to Carbyne.”

“According to Elichai, the company has been in contact with Epstein’s estate to find a way to buy back the dead financier’s stake in the company, which he says is ‘about 5 percent,’” Forbes reported at the time.

The company was relatively unknown for years. But after Epstein was arrested in July 2019, journalists began investigating every aspect of the accused sex trafficker’s life—including his connections to Barak, who was Carbyne’s chairman at the time.

Barak has vigorously denied any allegations of sexual wrongdoing, but has reportedly admitted to visiting Epstein’s private island in the U.S. Virgin Islands, as well as his Manhattan mansion.

Following Epstein’s July 2019 arrest, the Israeli newspaper Haaretz broke the story about Barak and Epstein having invested in Carbyne.

“Epstein financed a considerable part of the investment, thus becoming a partner in the project,” Haaretz reported.

Barak reportedly declined to comment on Epstein for Haaretz.

“I saw the business opportunity and registered a partnership in my control in Israel. A small number of people I know invest in it,” Barak said in a statement to Haaretz. “Since these are private investments, it wouldn’t be proper or right for me to expose the investors’ details.”

However, Barak told The Times of Israel that he was a business associate of Epstein.

“You don’t have to investigate—I confess,” he told The Times of Israel in July 2019. “I gave a second chance, both to Epstein and to Bibi [Netanyahu]. Both are now neck-deep in criminality. I expect both to recuse themselves until the truth is ascertained.

“For my part, all my activities were those of a private citizen, not a minister or prime minister. All were legal, reported to the authorities, and taxes were paid on them,” Barak said at the time.

Numerous other outlets have reported on the ties between Epstein and Carbyne, starting with the Israeli newspaper Haaretz, and including mainstream publications such as the Miami Herald, Business Insider, The Daily Beast, Yahoo and The Times of Israel.

“The stated purpose of Epstein’s [stake] in Carbyne was to help 911 callers by connecting the dispatch system to their cellphones’ microphone, GPS, and camera, giving the dispatcher a live feed of the caller’s surroundings,” the authors wrote of Epstein and Carbyne.

Today, Carbyne is in the process of expanding in the United States. The firm hired LSN Partners to lobby for the Build Back Better Act and the potential $500 million in subsidies for 911 call center updates therein, according to public disclosures required by the Lobbying Registration Act.

The LSN lobbyists listed on its disclosure forms include Tom Quinn, a former legislative director for then-Rep. Peter Visclosky (D-Ind.), and José Fuentes, a former communications director for USAID and former staffer for the Office of the Vice President and the Department of Defense.