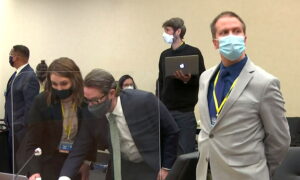 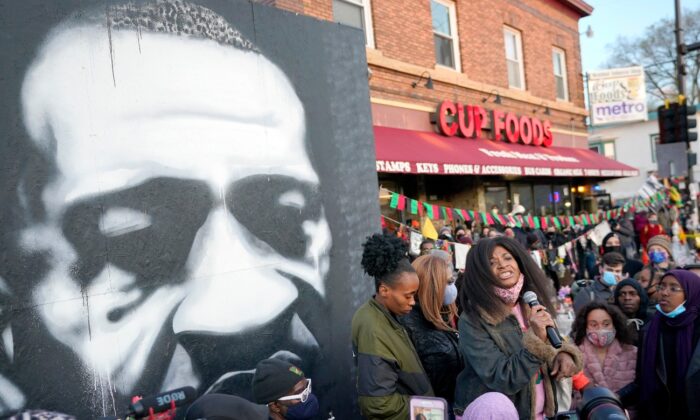 Angela Harrelson (R) aunt of George Floyd, talks to supporters at George Floyd Square after a guilty verdict was announced at the trial of former Minneapolis police Officer Derek Chauvin for the 2020 death of Floyd, in Minneapolis, Minn., on April 20, 2021. (Julio Cortez/AP Photo)
Crime and Incidents

Far-left activists who have occupied Minneapolis’ George Floyd “autonomous zone” for nearly a year are allegedly refusing to leave unless their list of 24 demands is met.

The group of protestors have taken up an area surrounding the intersection of East 38th Street and Chicago Avenue, where Floyd took his final breath on May 25, 2020.

Other demands include dropping charges against non-violent protesters from 2016-2017 and continuing the closure of the “autonomous zone” until after the trial of the four officers charged for the murder of George Floyd.

Protestors have allegedly threatened to “expand” and create new zones if their demands aren’t met, according to journalist Andy Ngo.

George Floyd Square has been closed since late May and the corner has become a makeshift memorial to Floyd. The area has been blocked by barricades and activists allegedly do not allow police inside the zone.

A sign has also been erected inside the memorial with special rules for white people, asking them to “decenter” themselves and to “be mindful of whether your volume, pace, and movements are supporting or undermining your efforts to decenter yourself,” among others.

A Twitter account that claims to post on behalf of the zone, Twin Cities Encampment Responders, posted on Wednesday, “We don’t need the mayor’s permission to make decisions about our city. 38th & Chicago will be held until our demands are met.”

In February, city leaders said that the intersection would reopen after the trial of white former Minneapolis police officer Derek Chauvin.

Neighbors told the Washington Times that they have tried working with protesters, and asked that traffic not be disrupted but were met with threats from activists.

Earlier this month, the city of Minneapolis passed a $1 million bailout plan for businesses suffering from inside of the autonomous zone, the Minneapolis Star Tribune reported.

Floyd, a 46-year-old Black man, died after Chauvin held his knee against Floyd’s neck and back for approximately nine-and-a-half minutes as Floyd laid handcuffed and face-down on the pavement and despite his repeated shouts that he could not breathe.

The former officer is being kept isolated in prison as he awaits sentencing following his conviction, which is scheduled to take place in eight weeks.