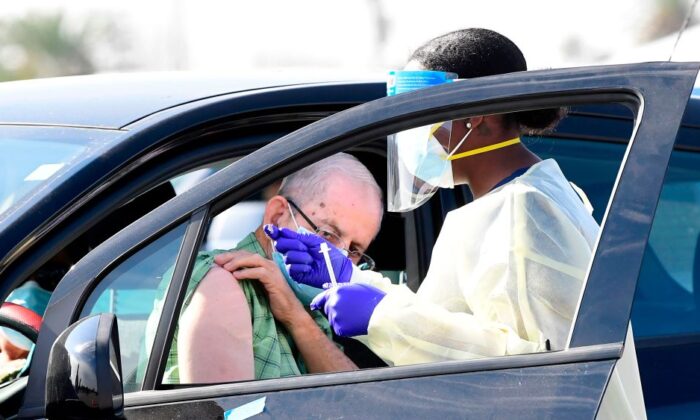 People pull up in their vehicles for Covid-19 vaccines in the parking lot of The Forum in Inglewood, Calif., on Jan. 19, 2021. Five large-scale vaccination sites opened throughout Los Angeles County in the fight against the coronavirus pandemic as California became the first state to top 3 million virus cases. (Photo by FREDERIC J. BROWN/AFP via Getty Images)
Southern California

As Orange County prepares to open its next super vaccination site, its neighboring county to the north is struggling to keep pace with inoculations due to “extremely limited” supply.

As it began expanding vaccinations to residents 65 and older, the Los Angeles County Department of Public Health (Public Health) said on Jan. 20 that demand for the vaccine greatly exceeded the county’s inventory.

“While there is great interest in the COVID-19 vaccine, and for good reason, the vaccine supply is still extremely limited, and we want to urge everyone to have patience as we work urgently with our federal and state partners to expand capacity and supply in the weeks ahead,” Public Health Director Dr. Barbara Ferrer said in a Jan. 20 press release.

“Of the vaccination doses that we received for this upcoming week, 73 percent of our allocation will need to be used for second doses. The little bit that remains, along with any vaccine that wasn’t used the previous week, is what is available for us to use for appointments for those eligible to receive first doses. We just are not receiving enough vaccine doses to move as quickly as we would like.”

Capacity isn’t an issue in the county, Public Health said. It said it’s capable of vaccinating a large number of residents, thanks largely to five large-scale vaccination sites that opened Jan. 19, as well as other vaccination hubs.

Instead, it’s the supply shortage that’s slowing the process down.

Meanwhile in Orange County, the process has been much smoother despite some setbacks, Orange County Supervisor Lisa Bartlett said.

“In LA County, I know it’s a larger county, they’re still trying to get health care workers vaccinated, they haven’t even started on their seniors aged 65 plus,” Bartlett told The Epoch Times. “And here we are in Orange County and we’re already making great strides. And we have a robust program in place to get all of our seniors 65 plus vaccinated as quickly as possible.”

“If you compare Orange County to some of the other counties that have struggled to get a program in place, we’ve done a really good job,” Bartlett.

Orange County’s rollout hasn’t been without hiccups. Its first super site at Disneyland was forced to shut Jan. 19 and 20 due to high winds. And when the county launched its scheduling platform, Othena, users complained of bugs and website crashes.

Bartlett said glitches aren’t unusual for new software, and added that many of the bugs have been worked out. She credited Othena with helping manage the thousands of residents ready to be inoculated.

“If we didn’t have that program in place, we wouldn’t be where we are today with the substantial numbers of residents that have been able to get vaccinated.”

Any Orange County resident can sign up for the Othena app, but can’t get a vaccination appointment unless they are within phase 1A. Users will be notified by the app when the county reaches their tier for vaccination.

“The fact that we’ve got something in place that’s actually operational is a good thing for our county, and other counties are looking at what we’re doing here, as opposed to the semi-manual system that they might have in place for scheduling appointments in their own counties,” she said.

“Orange County is a county that’s really proactive. A lot of counties wouldn’t want to take on a pilot program such as this, but in our initial research, we said rather than create a program from scratch, which would take a lot longer … it’s better to take a semi-proven program where you’ve got the intent of the software developer to create the most bulletproof program possible.”