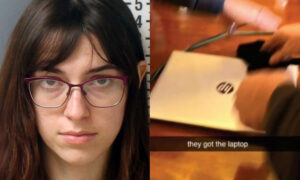 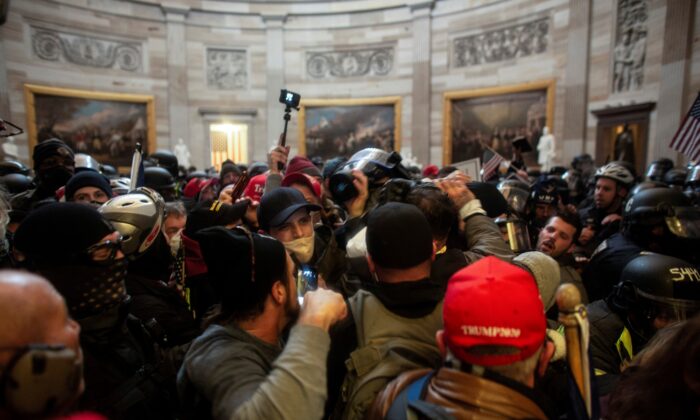 Two off-duty police officers from Virginia who were charged in connection to the U.S. Capitol breach have been fired from their jobs, according to the town of Rocky Mount, where they were employed.

Jacob Fracker and Thomas Robertson have been let go from their employment at the Rocky Mount Police Department following a review for their alleged participation in the breach of the Capitol building earlier this month.

“The Town has followed the necessary due processes to conclude our review and notify these individuals of this decision. We will continue to assist in the federal investigation as called upon,” a statement from the town said.

The town explained that it holds its officers to high standards for how they “conduct themselves on and off-duty.”

“The process we have gone through reinforces how seriously we aim to uphold these standards and how important it is to communicate that the department works in the best interest of everyone’s safety,” the statement added.

Earlier this month, the pair were arrested after they were identified in a photo making an obscene statement in front of a statute of John Stark inside the Capitol building, prosecutors from the U.S. Attorney’s Office for the District of Columbia said.

An investigation by the United States Capitol Police found social media posts allegedly authored by Robertson admitting to participating in the riots.

“CNN and the Left are just mad because we actually attacked the government who is the problem and not some random small business,” the post states, according to court documents (pdf).

Fracker has also been accused of authoring a separate social media post, which has since been deleted, which allegedly said, “Not like I did anything illegal.” Fracker also reportedly said he had been escorted “in” by the Capitol Police.

The pair have been charged with one count of knowingly entering or remaining in any restricted building or grounds without lawful authority and one count of violent entry and disorderly conduct on Capitol grounds.

So far, no lawyers are listed on the docket report of this case.

Earlier on Tuesday, U.S. Attorney for the District of Columbia Michael Sherwin told reporters during a conference call that prosecutors are preparing to bring sedition charges against some rioters over the Jan. 6 Capitol breach.

“We are working on those cases and I think the results will bear fruit very soon,” Sherwin said.

The top prosecutor for Washington said the cases would involve 18 U.S. Code § 2384, or seditious conspiracy, and could have a maximum penalty of 20 years in prison.

No sedition charges have been brought in the breach as of yet, but at least one case of conspiracy has been filed.

The first conspiracy charges were filed against three people allegedly affiliated with the paramilitary organization known as the Oath Keepers on Jan. 19.

In a criminal complaint (pdf) filed on Jan. 19, prosecutors allege that Thomas Edward Caldwell, 65, of Clarke County, Virginia, had a leadership role in Oath Keepers and conspired with others to “forcibly storm” the Capitol building. The complaint also names Donovan Crowl, 50, from Ohio, and Jessica Watkins, 38, from Ohio, as alleged co-conspirators in that plan. Crowl and Watkins allegedly were part of the group.

The three individuals and others had communicated with one another in advance of the breach and planned their attack, FBI Special Agent Michael Palian alleged in his affidavit. Palian said he had reviewed footage of the Jan. 6 event and observed eight to 10 individuals wearing paramilitary equipment attempting to enter the Capitol building.

These individuals were wearing helmets, reinforced vests, and clothing with Oath Keeper paraphernalia, Palian said, and were operating in an “organized and practiced fashion” as they forced their way to the front of the crowd gathered around a door to the U.S. Capitol.

The three members were each charged with conspiracy, conspiracy to impede or injure officer without lawful authority, destruction of government property, obstruction of an official proceeding, restricted building or grounds violent entry, and disorderly conduct on Capitol grounds.