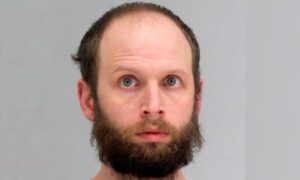 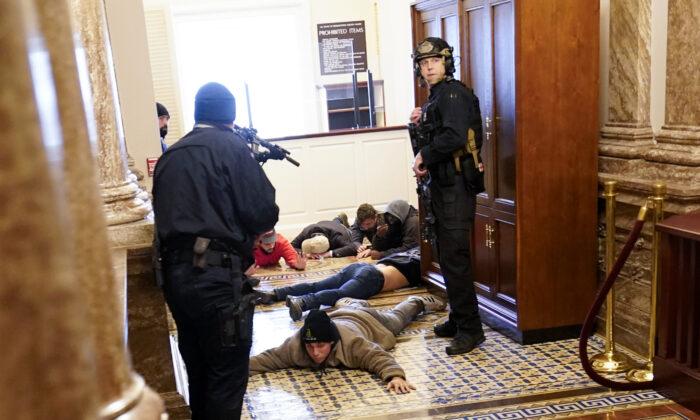 U.S. Capitol Police hold rioters at gun-point near the House Chamber inside the U.S. Capitol in Washington on Jan. 6, 2021. (Andrew Harnik/AP Photo)
US News

US Prosecutors Preparing to Bring Sedition Charges in Capitol Breach

Prosecutors are preparing to bring sedition charges against some people involved in the Jan. 6 breach of the U.S. Capitol, a U.S. attorney said Tuesday.

“We are closely looking at evidence related to the sedition charges,” acting U.S. Attorney for the District of Columbia Michael Sherwin told reporters in a call.

“We are working on those cases and I think the results will bear fruit very soon,” he added.

The penalty for a sedition charge is up to 20 years in prison.

No sedition charges have been brought in the breach as of yet.

Authorities have opened over 400 case files related to the incident, Sherwin told reporters. Authorities have hit over 150 people with federal charges while over 50 others have been charged outside of federal court.

Virtually everyone charged federally has been charged with at least one felony, including obstruction of government proceedings.

Prosecutors started with the most easily provable cases and are making their way to harder ones. Recent charges have involved video footage that has taken law enforcement thousands of hours to pore over. Investigators are now turning to more complex cases, including ones targeting militia groups that were actively involved in planning and breaching the Capitol. They’re also beginning to look closer at assaults on law enforcement officers and reporters.

Steven D’Antuono, assistant director in charge of the FBI’s Washington Field Office, noted that some cases have been built with evidence submitted by family members and friends of the accused.

Investigators still have not announced suspects in two major cases: the death of U.S. Capitol Police officer Brian Sicknick, who perished a day after the storming from injuries he suffered while responding to the breach, and setting off pipe bombs at the headquarters of the Republican and Democratic national committees.

Authorities have devoted specialized teams to the former and have upped the reward for information about a person of interest captured on camera in the latter.