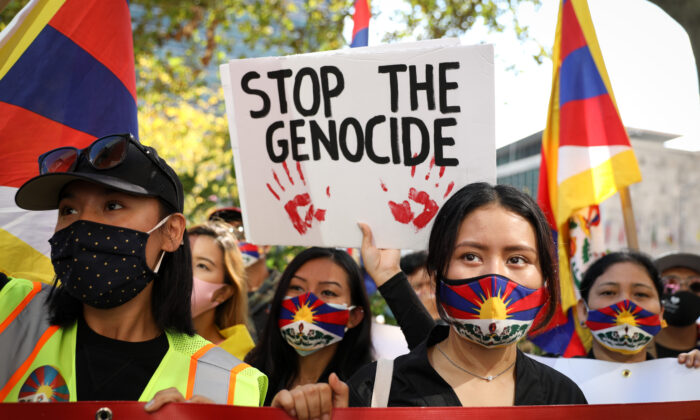 NEW YORK—More than 150 groups in some 90 cities around the world rallied in protest of the Chinese regime’s human rights abuses as it celebrated its 71st year of rule.

The global coalition on Oct. 1—the anniversary of the Chinese Communist Party’s takeover of China in 1949—was a diverse mix of Tibetans, Hongkongers, Taiwanese, ethnic Mongolians, Uyghur Muslims, Kazakhs, and exiled Chinese dissidents, each with grievances against the regime for persecuting their communities. The suppression they faced has revealed to the world the true face of the Chinese regime: one that disregards human rights and poses threats to the world, they told The Epoch Times.

“The CCP [Chinese Communist Party] cannot be given a pass, cannot be absolved of justice, just because it’s ruling China,” said Rep. Scott Perry (R-Pa.) in a speech in front of the U.S. Capitol.

Perry introduced a bill Thursday morning to designate the CCP as a “transnational organized group” and eliminate sovereign immunity for Chinese officials—which would allow them to be tried in U.S. court for criminal prosecution, according to a copy of the bill that The Epoch Times has obtained.

“We must be the generation that confronts and defeats, and ends the wicked regime of the CCP,” he said.

Different from the past few years, activists said they felt a newfound sense of solidarity as different groups witnessed Beijing’s recent authoritarian clampdown, such as the regime’s proposed elimination of Mongolian-language teaching in Inner Mongolia schools, mass arrests of pro-democracy activists in Hong Kong, and repressive policies in Tibet and Xinjiang.

Pema Namgyal, a 26-year-old Tibetan graduate student majoring in psychology, was among more than 150 protesters who attended a rally in front of the United Nations headquarters in New York, calling for the Chinese regime to be brought to justice.

“It has nothing to do with the Chinese people personally, but the government itself,” he said. Namgyal was born and raised in India, and later immigrated to New York with his parents as refugees.

Meanwhile, Rinchen Namgyal (no relation), board member of New York-based advocacy group Students for a Free Tibet, called on leaders of the free world to form a multilateral alliance to “independently investigate the situation in China-occupied regions.”

Given the regime’s human rights record, the United Nations should block China from participating in the Human Rights Council, he said. In April, a Chinese delegate was elected to a Council consultative group that appoints the panel’s human rights monitors.

Deception has characterized the CCP’s 71 years of rule, said a woman who identified herself as Hongkonger A.

“They say ‘yes’ to everything before signing an agreement, but walk back on their promises immediately after,” she said, noting the Sino-Joint Declaration that promises her homeland, a former British colony, a high degree of freedom under Chinese rule until 2047.

While her father has been telling her about the regime’s “evils” since she was young, it was only last year, when millions in Hong Kong protested over a now-axed extradition bill, that she fully realized the extent of Beijing’s tyranny. The authorities’ speedy application of a sweeping national security law has been especially alarming, she said.

“We used to have free speech, freedom of the press. Now we have nothing,” she said.

Nicole Sara, an activist who lived in Hong Kong for 11 years, called China’s “National Day” a “day of mourning.”

“As far as all these people are concerned, there’s nothing to celebrate,” she told The Epoch Times. “It’s the beginning of the devastation for many, many people.”

“Evil regimes come and go,” she said, believing that the Chinese regime would one day collapse. “One day we’ll look back and see the stain on Chinese history.”

The article has been updated to reflect the latest number of participating cities.