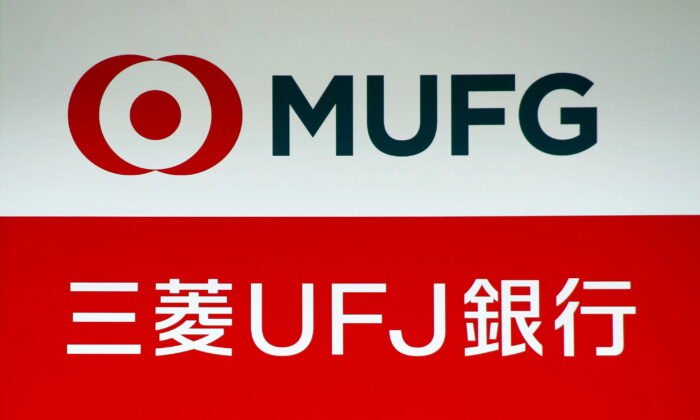 A signboard of MUFG Bank in Tokyo on April 3, 2018. (Toru Hanai/Reuters)
Asia & Pacific

TOKYO—Mitsubishi UFJ Financial Group Inc reported a 70 percent plunge in first-quarter net profit, blaming one-off losses related to the sale of MUFG Union Bank and a drop in the value of its stake in ride-hailing firm Grab Holdings.

The bank, Japan’s largest lender by assets, booked an appraisal loss of 254 billion yen ($1.9 billion) on bonds and other assets held by MUFG Union Bank, an accounting treatment required ahead of the $8 billion sale of the U.S. retail banking unit to U.S. Bancorp later this year.

The previously flagged loss would be partly offset when the sale is complete, and the overall impact on full-year net profit is expected to be around 200 billion yen, the bank said.

The Japanese bank invested $706 million in Grab in 2020 as it sought growth amid a prolonged low interest-rate environment and a shrinking population at home.

But Mitsubishi UFJ saw strong growth in net interest income, money earned from loans and securities above their costs of funds.

Mitsubishi UFJ maintained its full-year profit forecast of 1 trillion yen, a 12 percent drop from the previous year when it posted a record profit. The outlook compared with an average forecast of 1.05 trillion yen from 13 analyst estimates compiled by Refinitiv.

By Makiko Yamazaki; Editing by Susan Fenton and David Holmes)