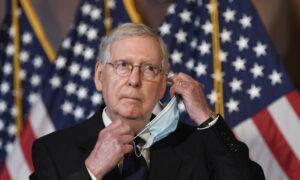 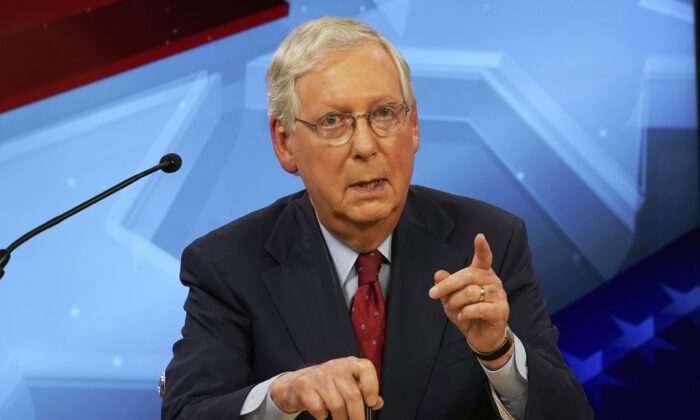 McConnell, 78, who’s represented Kentucky in the Senate for the past 36 years, handily defeated his opponent. With some 95 percent of precincts reporting, he held 58.2 percent of the vote to McGrath’s 37.8 percent.

He’s been the leader of Senate Republicans since 2007 and is expected to continue in that role.

McConnell said on Oct. 30 that he plans to move forward with filling two vacancies in the circuit courts regardless of the election outcome.

Democrats hold a grudge against McConnell, particularly for leading the speedy confirmation of Barrett, who was sworn in eight days before the election without a single Democrat raising a hand for her.

McConnell’s first order of business after the election will be to negotiate a stimulus package to help Americans deal with economic damage caused by lockdowns imposed by state authorities in response to the CCP (Chinese Communist Party) virus pandemic.

He said on Oct. 30 that the package will likely be passed early next year, but needs to be leaner than Democrats have been proposing.

“We probably need to do another package, certainly more modest than the $3 trillion [House Speaker] Nancy Pelosi package. I think that’ll be something we’ll need to do right at the beginning of the year,” he said.

“We could target it particularly at small businesses that are struggling, and hospitals that are now dealing with the second wave of the coronavirus, and of course the challenges for education, both K–12 and college.”

McGrath is a retired Marine Corps fighter pilot. Shortly after leaving military service in 2017, she ran for Kentucky’s 6th Congressional District, but lost to incumbent Republican Andy Barr in 2018 by 3.2 points. The relatively small margin suggested her as a viable candidate in the deep-red state. But McConnell, with Trump topping the ticket, proved too much to overcome.

The results so far indicate local polling (pdf) overstated McGrath’s chances, putting her 9 points behind McConnell in mid-October, even as she raised more than $88 million during the campaign.

Kentucky will accept mail-in ballots postmarked on or before Election Day up until Nov. 6. But as of Nov. 1, there were only about 80,000 ballots outstanding, not nearly enough to challenge McConnell’s winning margin, even if every single one was returned in time and voted Democrat.

Republicans hold a 53–47 majority in the Senate, but face a particularly tough election battle this year, defending 23 seats compared to Democrats’ 12.

“It’s a 50-50 proposition,” McConnell said of the GOP prospects to hold the chamber. “We have a lot of exposure. This is a huge Republican class.”

Republicans were expected to flip one seat in Alabama on one hand, but also lose one each in Colorado and Maine. A number of other races appeared close.

The battle came down to “dogfights all over the country,” McConnell said.

Update: The article has been updated with Kentucky election results as of 11:48 p.m., Nov. 3.