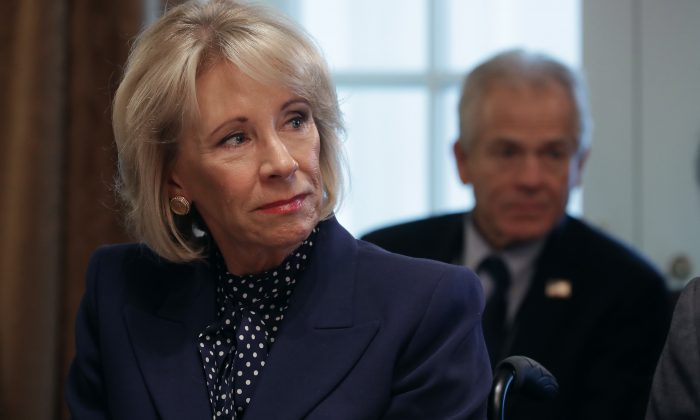 Education Secretary Betsy DeVos in the Cabinet Room at the White House in Washington on Feb. 12, 2019. (Chip Somodevilla/Getty Images)
US News

State lawmakers in Missouri are threatening to withhold funding from the embattled University of Missouri if it fails to provide adequate due process to students accused of sexual assault.

Critics say men accused of sexual assault or sexual harassment on college campuses are tried by college-administered kangaroo courts in Missouri and throughout the nation. They say the funding cutoff may be needed to curtail a flood of false claims of sexual abuse on campus.

Critics also say that an Obama administration guidance to colleges forced those institutions to adopt Kafkaesque rules for trying sexual abuse complaints that take away from accused students the most basic procedural rights.

During the nomination ordeal of Supreme Court Justice Brett Kavanaugh—who was suddenly accused, during the confirmation process, of sexual improprieties in his youth that have never been corroborated—on Oct. 2, 2018, a reporter said to President Donald Trump that his son, Donald Trump Jr., had remarked that in the #MeToo era, he feared more for his sons than his daughters.

Trump said it was “a very scary time for young men in America.”

Missouri state Sen. Bob Onder, a Republican, said the cutoff of funds may be necessary after hearing from attorney Chris Slusher, who said Mizzou students’ due process rights are routinely abrogated. He complained that in one case, he was given a mere five days to prepare to defend an accused student and that schools seem to disregard exculpatory evidence, Ashe Schow reports at The Daily Wire.

About the five-day period, Onder asked “That’s the University of Missouri’s policy?”

“They might need to be asked that in appropriations hearings, too,” Onder said.

Missouri lawmakers are considering proposals to change how state colleges process complaints made under Title IX, which refers to Public Law 92-318, or the federal Education Amendments of 1972.

Title IX amended four federal education-related statutes. It begins: “No person in the United States shall, on the basis of sex, be excluded from participation in, be denied the benefits of, or be subjected to discrimination under any education program or activity receiving Federal financial assistance.”

For its first quarter-century, Title IX enforcement aimed at equalizing the participation of the sexes in high school and college sports. But that changed in 1980, when the 2nd Circuit Court of Appeals ruled in Alexander v. Yale University that under Title IX, sexual harassment constituted sex discrimination. The legal team representing the students who brought the case was advised by radical feminist law professor Catharine MacKinnon, who has described rape as “whenever a woman has sex and feels violated.”

As a result of adverse publicity while the case was pending, Yale first, and then most U.S. universities, adopted grievance procedures for claims of sexual harassment. After the Alexander case, in a unanimous 1986 ruling in Meritor Savings Bank v. Vinson, the Supreme Court reinforced the key finding in Alexander, determining that sexual harassment ran afoul of federal laws against discrimination.

Missouri Rep. Dean Dohrman, a Republican who is sponsoring the legislation, said it provides “a safeguard for due process.”

“Title IX has a lot of vague language in it,” he said. “It leaves a lot of the administrative portions of the bill to the particular university or college and we just want to make sure that everybody’s rights are protected in the process.”

Defenders of the status quo say the proposed changes would be unfair to accusers because it would give accused students more rights than students accused of sexual abuse at colleges in other states.

“I see this system as designed to message females that, especially in the context of education, you’re supposed to be raped and be quiet. Because there’s no upside. There’s no upside. It’s all burdens, hurdles, punishment, stigma, suffering, that’s what you get for reporting,” Murphy said.

In 2011, the Department of Education sent a “Dear Colleague” letter to the nation’s 7,000-plus colleges that take federal funding to, according to critics, deny procedural fairness to accused students.

The letter ordered the use of the weaker standard of proof, the preponderance of evidence standard used in civil lawsuits, as opposed to the tougher “beyond a reasonable doubt” standard used in criminal proceedings, in campus sexual abuse adjudications. The letter also allowed double jeopardy and strongly encouraged that the accused not be allowed to cross-examine the accuser.

Education Secretary Betsy DeVos has proposed a new rule under Title IX to compel colleges to afford students the right to cross-examine their accusers.

There must be “clear policies and fair processes that every student can rely on,” she said, adding this is the “very essence of how Americans understand justice to function.”