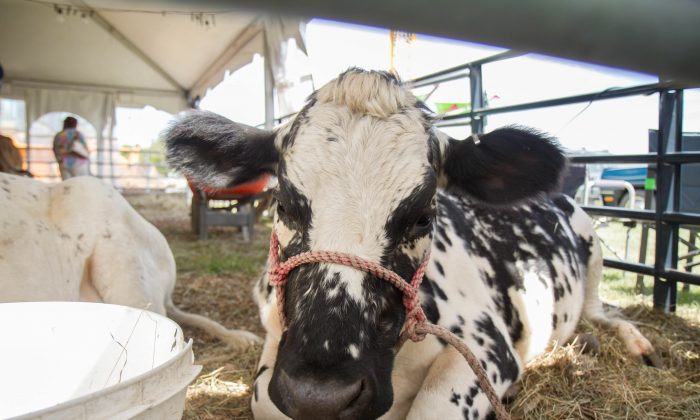 Domino, an almost 2-year-old American Lineback cow sits in the cattle tent before the cattle show at the Otisville Country Fair on Aug. 22, 2015. (Holly Kellum/Epoch Times)
US

Mississippi: Truck Carrying 100 Cows Overturns and Releases Them Onto Interstate

A truck carrying cows overturned in Mississippi on Friday morning, releasing the animals onto the highway, according to local reports.

Cattle herders on scene to remove cows from 18 wheeler pic.twitter.com/m0tahzj0xe

The 18-wheeler truck carrying the cows overturned at Interstate 20 near Interstate 55 at around 3:30 a.m. local time.

Some of the cows died in the crash, according to WAPT News.

Photos uploaded to Twitter captured the cows walking around on the highway. Approximately 40 cows escaped the big rig, and officials are working to round them up.

There was one accident with an injury when a motorist hit a stray cow.

Several cows are now off the streets of Jackson pic.twitter.com/PCRYFSIbE9

Mississippi police were seen rounding up cattle at a gas station in Jackson.

Some officers were also forced to tie down a cow to a street sign.

Officers have tied down a cow to this sign on I20 in Jackson pic.twitter.com/ezdabJ4kqe

All of the animals were taken from the 18-wheeler and were loaded onto another trailer, MS News Now reported.

The driver of the truck was injured and is now at the University of Mississippi Medical Center, reported WJTV.

Diesel also spilled onto the highway, the station added.