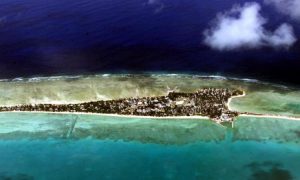 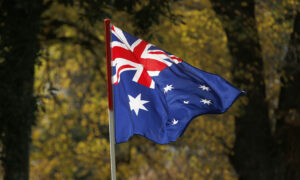 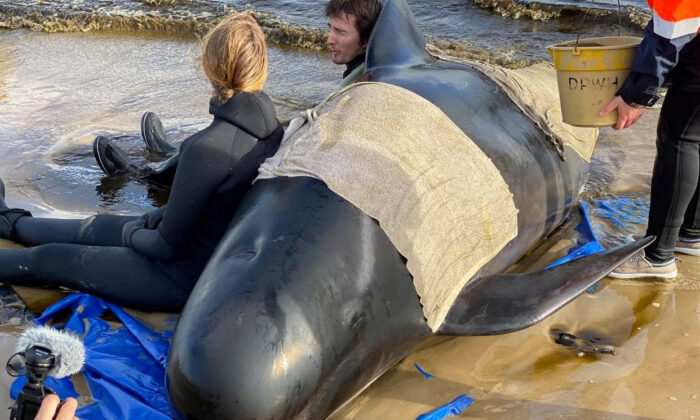 Mission Underway to Save 450 Dying Whales in Tasmania

Rescuers have found a further 200 whales, most of which are feared dead, in Macquarie Harbour on Tasmania’s west coast on Sept. 23, in one of the world’s largest whale stranding.

This brings the total number of dead pilot whales to about 290 and stranded to over 450.

“From the air, most of the additional whales detected appear to be dead, but a boat has headed over there this morning to do an assessment from the water,” Tasmania Parks and Wildlife regional manager Nic Deka said in a statement on Wednesday.

Marine conservation experts initially failed to detect the additional whales as they were seven to ten kilometres out, and not in a place that is obvious for stranding.

Authorities were alerted to the group of whales in Macquarie Harbour on Sept. 21. After a dire assessment, they ordered extra rescue crews and equipment from Hobart.

Marine wildlife biologist Kris Carlyon said that the rescue effort would depend on how the whales respond once they are elevated and have water underneath them.

“Some animals may be too big, or the location is too difficult to get to. About a third of the animals are deceased,” Carlyon said in a statement on Tuesday.

A rescue team of over 60 people, including police and wildlife authorities, plan to save as many whales as possible over the coming days.

“The rescue efforts are likely to take days, dependent on weather and tide conditions,” Carlyon said.

She said that the whales’ robustness helped by the current weather would mean they can survive for quite a few days.

“The challenge will be what to do with those animals once they are refloated. Will we have to herd them out, or will we have to move them by some other means?” Carlyon said.

Deka said that they have a pressure system to create a high tide and elevate the whales, as well as the labour and resources to do the job.

The cause of this whale stranding is “a complete mystery” according to wildlife scientist and whale expert Vanessa Pirotta. Still, Pirotta told 7News that the pilot whales are an offshore species which may have been led to shallow land by their curiosity.

“They may have been following one individual that led them astray, unfortunately. Maybe they navigated to the wrong place. It’s just simply unlucky,” Pirotta said.

“Some might survive for a couple of days. Some might be passing as we speak. But if they do pass, they will provide a lot of science knowledge, contribution, and data. We’ll learn a lot from it.”