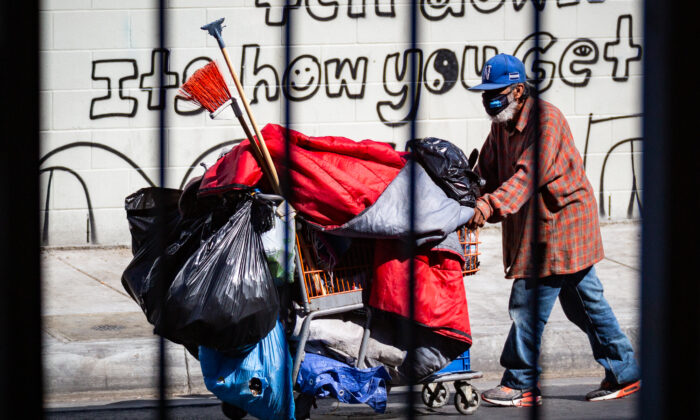 Mission Offers Help for the Suffering on Skid Row

Once homeless in the early 1990s, he now gazes out the window of his executive office from the top floor of the Los Angeles Mission.

The mentally ill, drug-addicted, economically disadvantaged, and victims of trauma wander outside the mission. One middle-aged man sits in a wheelchair, crack pipe in hand. Another woman sits atop her blankets and belongings on the sidewalk, a grocery cart parked beside her.

“People are suffering. They’re suffering from a mental illness, from loss of wages, economic insecurity, food insecurities … so all of that is systemic to the issue of homelessness now,” Vaughn told The Epoch Times.

Encampments line the sidewalks. Needles and trash are seen in plain view.

In a previous interview with The Epoch Times, Los Angeles Police Department officer Deon Joseph said gangs control much of the area, charging transients for “rent.” And the lack of enforcement due to city policies—such as Proposition 57 and Proposition 47—has contributed to the area’s worsening condition.

As politicians quarrel over how to solve the issue, some cite systemic racism at the core of it all, while others point to a lack of affordable housing in the state. Nonetheless, the homeless population climbs, while supportive housing units are stuck in pre-development pipelines funded by Measure HHH.

“Most people in our community see it as a one-size-fits-all kind of situation where we just need to develop more housing, permanent housing, and we will develop our way out of homelessness—and I think it’s much broader than that,” Vaughn said.

The Measure HHH initiative, passed in 2016, set aside $1.2 billion in obligation bonds to build 10,000 permanent supportive housing units across the county. According to an independent audit by L.A. Controller Ron Galperin, only three units have been built in the five years since then.

While Vaughn’s office walls now are covered in academic accomplishments—and a Juris Doctor degree from Concord Law School—he can recall the days of sleeping on the streets below and can relate to those struggling with addiction.

“I was in and out of shelters down here, sleeping on the streets of Skid Row, eating at soup kitchens, but they don’t really have them now,” Vaughn said.

Instead, multiple shelters coexist in the 50-block radius that encompasses Skid Row.

The faith-based mission has existed for more than 80 years, providing food, shelter, clothing, and a variety of programs and services.

It runs on a $22.5 million budget, with state grants making up 12 percent. The remaining funds come from donations. Each person in the residential transitional housing costs roughly $25,660. But the price tag isn’t a deterrent when transformed lives graduate from the program, Vaughn says.

“We have certain capacities, and we believe that we are a stabilizer,” he said. “We are here to help stabilize a person’s life as a beginning point, and so we offer that to our community.”

Skid Row has evolved since Vaughn found himself on the streets after getting hooked on drugs to cope with his absentee father’s death.

It’s now the largest concentration of Los Angeles’s homeless population, with more than 4,600 unsheltered people in the area, according to a Los Angeles Homeless Services and Authority (LAHSA) count from 2019. Across the entire county, there are more than 66,000 homeless people.

“We define Skid Row here in downtown Los Angeles, but Venice will say they have a Skid Row, right? I can go on all the way up the state and point out Skid Rows,” he said.

Venice Beach, which falls within Councilmember Mike Bonin’s district, has been dealing with its own explosion of homeless encampments on the boardwalk and beach, too, although the city implemented a supportive housing shelter a few blocks from the beach. L.A. Sheriff Alex Villanueva announced a sweep of the encampments by July 4 and deployed his officers to connect as many people as possible with housing before then.

Bonin defended his housing policies and was granted $5 million from the budget and finance committee to house more homeless. Bonin’s office didn’t respond to repeated interview requests by The Epoch Times.

The problem has spiraled out of control, and city leaders aren’t doing enough to address it, according to a federal judge who filed a preliminary injunction against L.A. County earlier this year, demanding the county find housing for every person on Skid Row by October. The motion is now paused, but District Judge David O. Carter isn’t letting up. It’s the first time the court has gotten involved in the county’s management of the homeless.

Carter is also overseeing a lawsuit filed by the LA Alliance for Human Rights against the county for its handling of the homelessness crisis.

“The court’s going to stay diligent and involved,” Carter told city attorneys. “I’m telling you that and I’m not budging on that. There’s too much death out there. And it’s women and families and, eventually, it’s Skid Row.”

While disagreements and bureaucracy fuel the discourse, outreach workers such as Antoine Sanford see the anguish every day. He said he understands Carter’s urgency, but finding housing for every person on Skid Row is “not realistic.”

“The increase of mental health [issues] came based off of the type of drugs that they’re using now, it seemed like the drugs are inducing more mental health than it could be from a natural cause,” Sanford, outreach manager for the mission, told The Epoch Times.

“I would say that the majority of the people are struggling with alcohol or drug addiction.”

He said most of the people who have an addiction receive government help, such as supplemental security income, but the drug dealers who dwell in the encampments will take advantage and charge them for rent.

The COVID-19 pandemic restrictions also presented challenges. L.A. Municipal Code Section 56.11, which banned tents from 6 a.m. to 9 p.m., was rolled back to mitigate the spread of the virus and hasn’t been reinstated.

The tents, Sanford said, have exacerbated the problem.

“When you come down here, you see homeless people and you want to be able to provide for them, and you feel like letting them have a tent on the sidewalk to help, but it really doesn’t help—because all it does is it has them to be in a comfortable setting to use addiction, to use drugs, and also to be taken advantage of,” he said.

Sanford said the encampments allow for drug addictions to flourish.

“He’ll be there all day smoking,” Sanford said, pointing to a man on the sidewalk with a crack pipe.

“So if we provide encampments for them, then they’ll be there all day smoking, using drugs, they have sex in these tents—there’s guns in these tents. But we let them know we’re here for them, and I’ve seen people come out of those tents and come into the program.”

He said he helped a homeless couple get connected with housing, and a job at the mission.

“But then the drug addiction caused them to lose their housing because they couldn’t maintain paying rent,” he said. “There needs to be a period where we stabilize them, and get them acclimated in and on how to be able to manage their life once they come out of homelessness, you can’t just rush that process.”

Corona native Summer Sullivan, a recovering drug addict who is graduating from the mission’s transitional housing program this year, told The Epoch Times said she’s excited to leave the program and return to normal life.

Even though she wasn’t homeless in L.A., Sullivan got hooked on pain killers after being prescribed Tramadol to remedy the chronic joint pain from her fibromyalgia.

And while city leaders and community members squabble over what it will take to help the homeless, Los Angeles Mayor Eric Garcetti announced a $1 billion plan to address homelessness in the city earlier this year.

Vaughn said he wants to see that money go “go into communities that have been neglected.”

“And rehab properties that are in blight within the city’s boundaries, and to help communities reemerge healthy and whole to create affordable housing stock that’s needed in our communities, so that people can afford to live here in Los Angeles,” he said.

“With intentionality, I think that’s how we start to really begin to create opportunities to erase some of the effects of choices we made in the past that has brought us to this place of homelessness.”