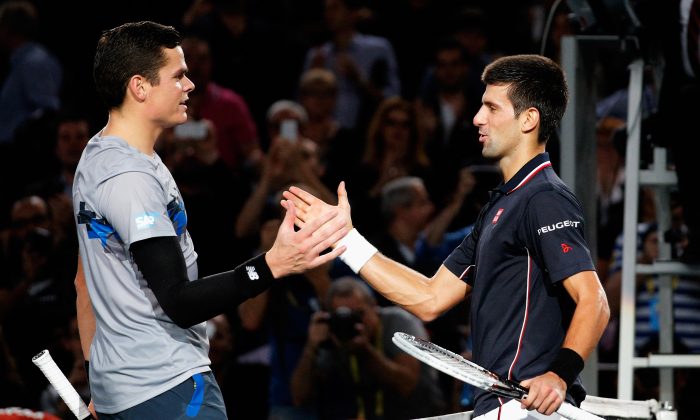 What a week in Paris it’s been for Milos Raonic. The big Canadian reached the ATP Masters 1000 tournament final before bowing out to world No. 1 Novak Djokovic 6–2, 6–3 on Sunday.

But more importantly, he became the first Canadian to reach the exclusive ATP World Tour Finals in singles. He was on the bubble coming into the tournament and needed to beat some big names to reach the latter stages and even get some help.

“It’s been an incredible week for me,” Raonic said in French during the trophy presentation ceremony. “It will take a big focus for the finals in London.”

Djokovic who was flawless on this day congratulated his good friend.

“I’m very happy for him to reach his objective of qualifying for London,” Djokovic said in French. “It’s not easy to play against a guy serving 220 km/h.”

Raonic’s serve was helped by the ideal conditions on an indoor hard court. But Djokovic’s return game was too strong and the Serb broke the Canadian three times.

The biggest domination took place in rallies lasting between five and nine shots. Djokovic won 23 of 33 such points. Djokovic successfully defended his title, notched his fourth ATP Masters 1000 title of 2014, and did it without dropping a set. It was truly a dominant performance by the game’s top player.

Raonic beat Roger Federer in the quarterfinals with an impeccable performance 7–6, 7–5. This was Raonic’s first win over the “Big Three” of men’s tennis—the other two being, of course, Djokovic and Rafael Nadal.

His win over Federer proved to be good enough to reach the ATP World Tour Finals in London as Japan’s Kei Nishikori beat Spain’s David Ferrer later that day to round out the field.

Raonic then overcame Tomas Berdych in the semifinal on Saturday in three tough sets to reach the final.

In the 12th game of the final set, with Raonic up 6–5, Berdych completely fell apart with two double faults and dropped serve to lose the match.

Raonic was pushed to the limit by young American Jack Sock in his first match. He won in a third-set tiebreak. He edged Spain’s Roberto Bautista Agut, winning a second-set tiebreak in the Round of 16. Again, Raonic proved to be rock-solid in tiebreaks, a hallmark of his success on tour this year.

The Barlcays ATP World Tour Finals in London runs from Nov. 9-16. The other elite players participating are Djokovic, Federer, Stan Wawrinka, Andy Murray, Marin Cilic, Tomas Berdych, and Nishikori. Spain’s Rafael Nadal will not be able to participate as he is scheduled for surgery on his appendix.