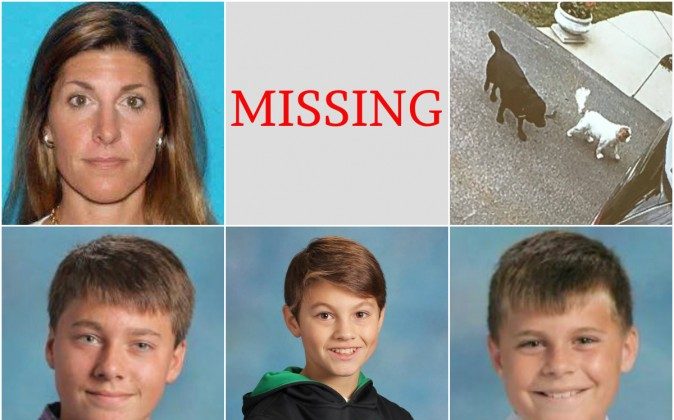 40-year-old Michalene Melges (top left) and her children, (bottom left to right) 14-year-old Hans, 12-year-old Kristian "Max," and 10-year-old Maverik "Buddy" were last seen on May 10. They're believed to be traveling with their two dogs (top right) King and Gigi. (Lake Geneva Police Department photos)
US

Updated article here: They have been found and are safe.

According to authorities, the newly-divorced mother called her children’s schools ahead of time and signed them out from May 10 to May 13.

Melges rented a van, believed to be for their vacation, in Lake Bluff, Ill., on May 9.

Authorities said Melges’ credit cards and cellphones have gone unused since the disappearance.

Chief Michael S. Rasmussen says the last time they were seen was when they were leaving their Lake Geneva, Wis., home on May 10. Authorities also believe that Melges and her three sons may be traveling with their two dogs, “King” a black in color English black lab and “Gigi” or “Geneva” a white in color Cavalier King Charles Spaniel.

The Chicago Tribune reported, citing Lieutenant Ed Gritzner of the Lake Geneva Police Department, that the missing mother is in violation of her children’s custody arrangement—and the boys have reportedly missed three visitations with their father.

Police suspect no foul play, and have no evidence that she is trying to keep the children from her ex-husband, Gritzer said. He said the police wanting to check up on Melges is precautionary.

Contrary to what the police say, commenters on the Lake Geneva Police Department Facebook page seem to assume that Melges is running away from something; some are even speculating domestic violence, although it’s not clear these people actually know the family.

Facebook user Tina Polman said: “Leave her be. She was abused. She is running.”

User Darrel KR said: “She is just wanted for a court violation in respect to the kids visitation. I do not know their situation but I have a feeling the court system was not listening to her concerns. She is most likely regrouping to figure out her life and will resurface soon I’m sure.”

User Olivia Arbaugh added: “This is my family and you know what we know. She and my cousins are missing and have had no contact with our family for two weeks. We are heartbroken and praying for their return.”

Melges’s Facebook page and Twitter accounts have been updated since she disappeared, but a new post appeared on Monday evening, explaining that she has a team who updates her social media.

“{Note} This is Michalene’s Social Media Team,” the post said. “We have been updating and keeping her accounts current. We appreciate all your concerns and notes. Please note, she is not posting, we are posting for her. Thank you.”

Anyone with information is asked to call 262-248-4455 or e-mail: egritzner@genevaonline.com