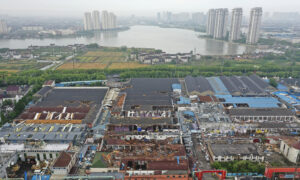 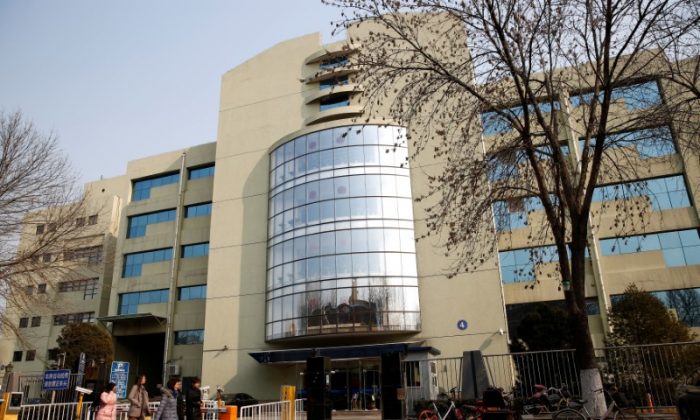 People walk past the building with the listed address of Tomorrow Holdings' Beijing office, China on Feb. 3, 2017. (REUTERS/Thomas Peter)
China

HONG KONG—The financial empire of missing Chinese-born tycoon Xiao Jianhua has put billions of dollars of investments up for sale, including stakes in a life insurer, a trust and banking assets, three people involved in the process told Reuters.

A billionaire with links to China’s Communist Party elite, Xiao vanished earlier this year. He was last seen in the early hours of Jan. 27, leaving the Four Seasons Hotel in Hong Kong in a wheelchair with his head covered, accompanied by several people described in media reports as mainland Chinese agents.

Xiao’s whereabouts are not known but his dramatic disappearance sparked widespread speculation he had been caught up in Chinese leader Xi Jinping’s crackdown on corruption.

Chinese authorities have not commented on Xiao’s disappearance, and his family could not be reached for comment.

Two of the sources with knowledge of the process said that now Chinese authorities are pressing Tomorrow Holdings, Xiao’s conglomerate, to pare back its sprawling asset portfolio, which includes stakes in more than 30 domestic financial institutions.

The sale is part of Beijing’s broader efforts to rein in risky practices by financial services firms, the sources said. None of the three sources could be named as the sale plans are not public.

The same two sources said Tomorrow had set up an internal team to handle the sale, which will include stakes in Huaxia Life Insurance, New China Trust Co, Bank of Weifang and Baoshang Bank. The stakes are substantial, though the specific percentage levels have not been disclosed and it is unclear if Tomorrow controls all of the companies directly.

No external advisers have been mandated, the sources said, and they also did not give any indication of expected prices for individual assets.

“The process is at an early stage and informal feelers are being sent to some large insurers as well as private equity companies,” said a fourth person with knowledge of the plans.

According to one source with direct knowledge of the situation, Xiao’s wife Zhou Hongwen, who co-founded Tomorrow with him in 1999, is running the business in his absence, but it was unclear how much she was involved in the decision to put the assets up for sale and whether she is closely involved in the process.

Tomorrow and the four subsidiaries did not return phone calls, emails and messages seeking comment. China’s insurance and banking regulators did not respond to requests for comment.

The State Council’s information office also did not respond to a request for comment.

Beijing has cracked down on other groups that, like Tomorrow, have used cash from insurance products to invest aggressively in riskier deals in areas such as property and soccer.

Anbang has said its chairman is temporarily unable to fulfill his duties and has not commented further.

Even a partial dismantling of Tomorrow‘s business empire, though, would take the aggressive government behavior a step further than previous warnings or punishments, and raise concerns for other tycoons and their companies.

Xiao, who is in his mid-40s and has close ties with some of China’s senior leaders and their families, was ranked 32nd on the 2016 Hurun China rich list, China’s equivalent of the Forbes list, with a net worth of $6 billion. His assets range from financial services to sugar and cement.

Xiao, who began his career selling imported computers, had lived for years in serviced apartments in Hong Kong.

In December, the China Insurance Regulatory Commission suspended the firm’s online insurance business and barred it from seeking approval for new products for three months. The regulator said the insurer had failed to fix problems concerning fake client information.

The fourth source said the insurance watchdog had demanded better oversight, but did not feel Huaxia had made progress and wanted to see it owned by someone other than Tomorrow.

Barclays bought a near-20 percent stake in another Tomorrow firm, New China Trust a decade ago, making it the first foreign bank to invest in a Chinese trust firm. Trusts are non-bank lenders that raise funds with high-yielding investments. Barclays’ stake has since been diluted to below 6 percent.

One of the sources said Barclays would sell part or all of its remaining shares. Barclays declined to comment on its stake.

The affiliates did not respond to requests for comment.