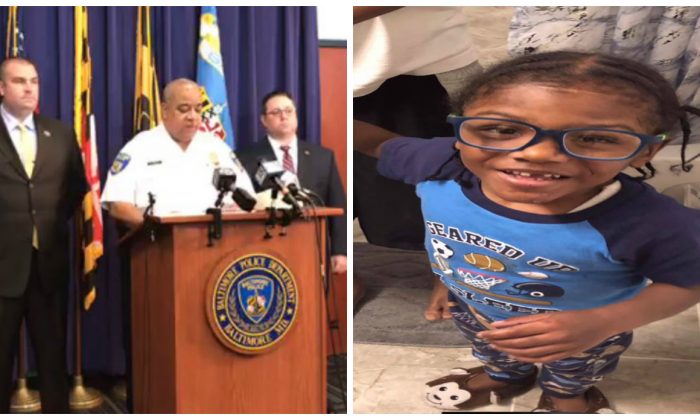 A missing 4-year-old Maryland boy was found dead in a dumpster.

“She confessed that her son was not missing, but deceased,” Harrison said.

She gave them the location of the body and officers found Malachi in a dumpster on Hayden Avenue, Harrison said.

Malachi, who had mild autism, was initially said to have walked away from his home in Baltimore on Thursday, Aug. 1.

Update: Missing 4 year-old Malachi Lawson FoundOn August 1, 2019, 4 year-old Malachi Lawson was reported missing from the 4500 block of Rogers Avenue in Northwest Baltimore City. An immediate and aggressive search for young Malachi was launched by members of the Baltimore Police Department, the FBI, as well as members of the community. Upon reviewing evidence and after interviewing the child’s mother, detectives learned of the location where Malachi Lawson's body could be found. On August 3, 2019 at approximately 4:45 A.M., the remains of 4 year-old Malachi Lawson were located and recovered in the 5500 block of Haddon Avenue. Malachi's biological mother and her spouse are currently in police custody awaiting transport to Central Booking where they will be formally charged. Anyone with additional information pertaining to the death Malachi Lawson is asked to call detectives at (410) 396-2100. Once the women are processed their charges and arrest photos will be made available.

Malachi’s mother, 25-year-old Alicia Lawson, and her spouse, 40-year-old Shatika Lawson, were arrested on charges of neglect resulting in the death of a minor.

Harrison said that an autopsy would be performed to confirm the exact cause of death. The findings may lead to additional charges.

Police said the body had “obvious signs of injury” but declined to provide more details, citing an ongoing investigation.

Police said Friday that Malachi’s femur bone was broken when he was an infant, causing him to walk with a limp.

Here’s the official Baltimore Police news release on the death of four-year-old Malachi Lawson. Body found at 4:45 this morning on Haddon Avenue, not far from Rogers Avenue where he was reported missing. The boy’s mother and her spouse are in custody: pic.twitter.com/9TobPgpzM8

Malachi’s uncle, Mike Code, said before the boy was found that he was a “lovable kid.”

“He’s quiet, he’s a lovable kid and likes to play a lot, and if anybody has seen him or knows about him, please bring him back,” Code told WBAL.

Code was helping search for the boy on Friday.

FBI agents joined search efforts that day. After the discovery of the body was announced, the FBI’s Baltimore office said in a statement: “The FBI shares in the sorrow the Baltimore community is feeling today regarding the news about Malachi. We would like to join our partners at the @BaltimorePolice and thank everyone for their assistance since his disappearance on Thursday.”

The FBI shares in the sorrow the Baltimore community is feeling today regarding the news about Malachi. We would like to join our partners at the @BaltimorePolice and thank everyone for their assistance since his disappearance on Thursday. https://t.co/FR2I8oxdq7

An estimated 674,000 children were determined to be victims of maltreatment in 2017, according to the Department of Health & Human Services’ Administration for Children and Families. Of the victims, about 75 percent were neglected, 18 percent were physically abused, and 9 percent were sexually abused. Nationwide, an estimated 1,720 children died from abuse and neglect, a decline from the 1,750 children who died from the same in the previous year.

The children who were killed by abuse or neglect were also overwhelmingly young, with about half of the fatalities being younger than 1 year old. Boys made up 58 percent of the deaths.

If you suspect a child is being abused or neglected, contact your local child protective services office or law enforcement agency so officials can investigate and assess the situation.

Most states have a number to call to report abuse or neglect. To find out where to call, consult the State Child Abuse and Neglect Reporting Numbers website. The Childhelp organization can also provide crisis assistance and other counseling and referral services. Contact them at 1-800-4-A-CHILD (1-800-422-4453).