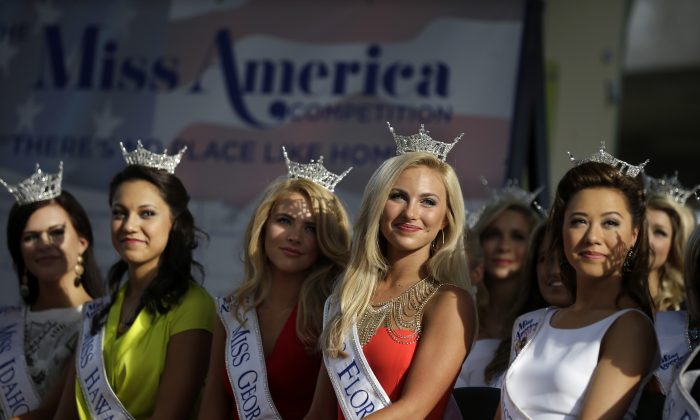 The 23-year-old hails from Hoschton, Georgia and attended the University of Georgia. She was born in Seoul, South Korea, and also lived in California and Georgia.

She moved to D.C. in August 2013 and works on Capitol Hill. She is the daughter of retired U.S. Army Major Julius and Kim Davis of Hoschton, Ga.

Her talent is piano.

Davis hopes to one day become the press secretary for the State Department after obtaining a Master’s degree in International Affairs.

Davis’ cause is Five Star Families: A Salute to Our Military and Their Families, an organization that supports military veterans and their families.

Miss America Set to Be Held in Atlantic City

ATLANTIC CITY, N.J.—This struggling seaside gambling resort has been in the national news for all the wrong reasons lately: a rash of casino closings, thousands of unemployed workers, and a domestic violence case involving a former NFL star.

But for three hours Sunday night, America will get a different look at Atlantic City. The Miss America pageant will present an upbeat view of the city where it began in 1921 and crown its next winner during a nationally televised finale.

“Atlantic City is facing a challenging economic climate and our hearts go out to all of those who have lost their jobs,” said Sam Haskell III, CEO of the Miss America organization. “We hope that our Miss America telecast on Sunday evening on ABC will generate great interest for Atlantic City on a national scale as we showcase their beautiful beaches and Boardwalk.”

Contestants from all 50 states, the District of Columbia, the U.S. Virgin Islands and Puerto Rico are vying for the crown.

There has been no shortage of compelling story lines leading up to the selection of the next Miss America, including the way personal tragedy has shaped the public service platforms of several contestants. The brother of Miss Wisconsin Raeanna Johnson killed himself after a secret addiction to methamphetamine. Her platform is the impact of substance abuse on the family.

The father of Miss Kansas Amanda Sasek killed himself when she was 17. Her platform is helping people find their strengths. And Miss Delaware Brittany Lewis is still waiting for an arrest to be made in the 2010 slaying of her sister. Her platform is combating domestic violence.

There was drama and even some low-brow comedy leading up to the finale. Miss Rhode Island, Ivy DePew, collapsed onstage during the first night of preliminary competition, but made it back the next night after two trips to the hospital for dehydration.

And supermodel and business mogul Kathy Ireland took the stage to burp on command on a dare from pageant host Dena Blizzard on the second night.

Wednesday’s winners were Miss Oklahoma Alex Eppler, who won the swimsuit competition, and Miss Kentucky Ramsey Carpenter, who won the talent portion with a fiddle performance.

On Thursday, Miss Maryland Jade Kenny won the swimsuit competition, while Miss Pennsylvania Amanda Smith won the talent portion by singing “Wishing You Were Somehow Here Again” from the musical “Phantom Of The Opera.”

The broadcast begins at 8 p.m. with a behind the scenes look at the pageant, while the live competition begins at 9 p.m.