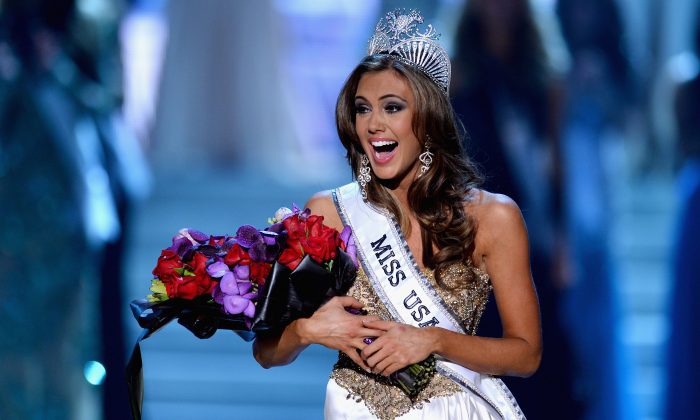 Erin Brady is an accountant with a love for Elton John, a fear of her own blood, and a crush on Mark Wahlberg. As the new Miss USA, she will become a spokeswoman for breast and ovarian cancer awareness—but advocacy for families affected by addiction is also important to her as someone who grew up around substance abuse.

The 25-year-old East Hampton, Conn., native has a degree in finance and a minor in criminal justice from the Central Connecticut State University. She works in Hartford, Ct., as a financial accountant for Prudential Retirement. She has worked with charities such as Habitat for Humanity, and participated in events such as Walk for The Cure.

She hopes to help break the cycle of addiction, as more than half of adult addicts are children of addicts. She remembers the difficulty in finding help as the child of an addict, though luckily now, she can report that her strongest addiction is to brussel sprouts.

Before the show on Sunday night, the judges spoke with Miss Teen USA, 18-year-old Logan West, who conducted interviews for the pageant. The judges explained what they would look for in choosing the next Miss USA.

Katherine Webb, who was Miss Alabama 2012, served as a judge on Sunday. She said Miss USA should be “someone who can represent our country the best way that she can, and be a light for others and put a smile on people’s faces.”

Nikki Bella, a World Wrestling Entertainment (WWE) performer, and judge at the Miss USA competition, spoke about the swimsuit portion of the competition: “Every shape is different and that’s what makes the world beautiful, but I want to see that sparkle in the eye and that smile when they are rocking that suit.”

Jessica Robertson of the reality TV series Duck Dynasty also served as a judge. She said, “Once they get to this point, really everyone’s a winner.”

Another judge—journalist and political satirist Mo Rocca—said the competition is not about pitting one state against another. “What I don’t want is for this competition to divide us further,” he told West. He said he wants a Miss USA who can represent the whole country—and one who can name the capitals of all states would be a bonus, as he feels an affinity with anyone who can perform this feat as he can.

Connecticut has now given the country both Miss Teen USA—Logan West is from Southington, Conn.—and now Miss USA. Brady accepted the crown with much emotion as Miss USA 2012, Nana Meriwether of Maryland, passed it on.

A Miss USA 2013 Question and Answer Session With Erin Brady