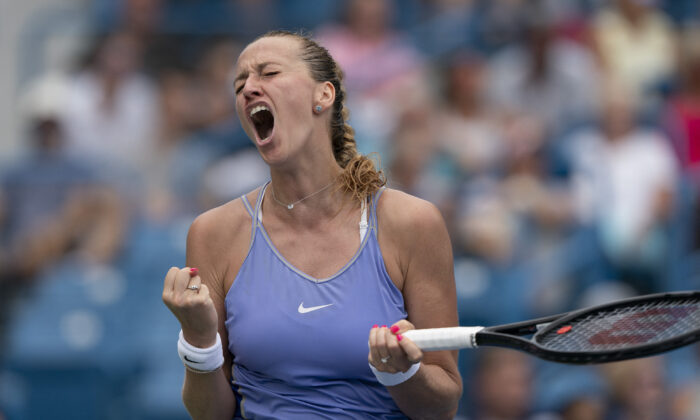 Petra Kvitova of Czech Republic reacts to a point during match against Madison Keys of the United States at the Western & Southern Open at the Lindner Family Tennis Center in Cincinnati, Ohio, on Aug. 20, 2022. (Susan Mullane/USA TODAY Sports via Reuters)
Tennis

Petra Kvitova overcame a sluggish start and 10 double faults to beat Madison Keys 6–7(6) 6–4 6–3 on Saturday and advance to the final of the Cincinnati Open.

In the day’s first match on a muggy Centre Court, a misfiring Kvitova had trouble getting into gear but produced some of her best tennis when it mattered by breaking the American favorite to start the third set and again to clinch a spot in Sunday’s final.

It will mark the 40th WTA Tour singles final for the 32-year-old Czech but first in Cincinnati.

“I expected it to be tough but I didn’t expect it to be that tough,” said Kvitova, who will return to the top 20 of the world rankings on Monday. “I don’t really care about the ranking.”

“Being in the final is of course more important, that is why I play tennis to be in the final and fight for the trophy.”

Keys, the Cincinnati champion in 2019, got off to a quick start and was gifted an early break when Kvitova double faulted three times to get in front 2–1.

But Kvitova slowly got her serve and groundstrokes under control and broke back to level at 3–3 as the set drifted to a tiebreak which Keys would claim 8–6.

In the second, Kvitova took command by charging ahead 5–2 but then struggled to close it out as Keys fought back to 5–4.

Serving for the set a second time, Kvitova would not squander another chance to send the contest into a decider.

Trailing 4–3, Keys had a superb opportunity to get back on level terms with three break points but was unable to convert as Kvitova fought back for the hold and then sealed her place in the final with another break.