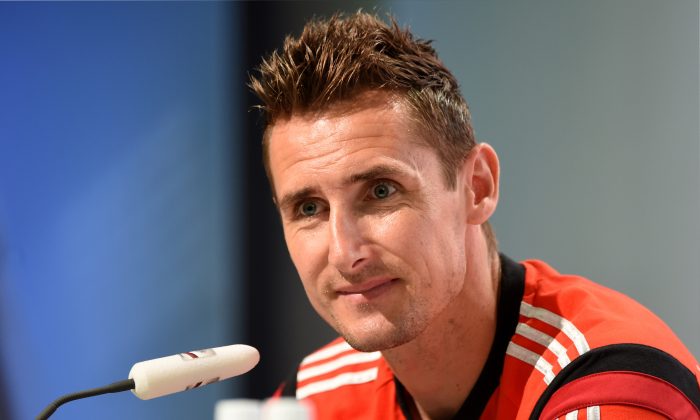 Germany's forward Miroslav Klose answers questions during a press conference in Santo Andre on July 10, 2014, during the 2014 FIFA Football World Cup. Germany will face Argentina in the final of the tournament on July 13, at The Maracana Stadium in Rio de Janeiro. (PATRIK STOLLARZ/AFP/Getty Images)
Soccer

Miroslav Klose: ‘I Don’t Want to Lose Another Final’

The 36-year-old German striker broke the World Cup scoring record with his 16th goal against Brazil in the semi final.

“It’s a hugely emotional thing for me, but people who know me, know that my focus is already on Argentina — 100 per cent,” Klose said in a press interview when asked about the goal.

“Yes, I have overtaken Ronaldo as the best goalscorer, but that is something to take on board another day.

“If we lose the final, my joy as the top scorer will be significantly dampened.

Klose addd, “We enjoyed the game against Brazil, but we ticked it off after 24 hours.

“In the next game, we have to again play to the best of our abilities.

“It feels really awful to lose a final, so it’s our time to win this one.”