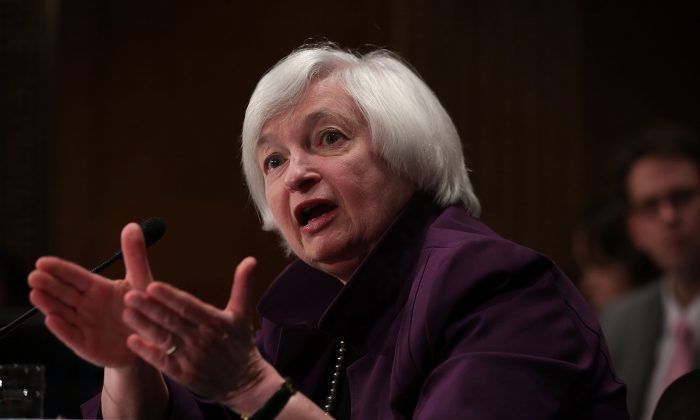 WASHINGTON—Federal Reserve officials believed last month that the economic conditions needed to trigger the first interest rate hike in nearly a decade could “well be met” by their next meeting in December.

Minutes of the October discussions released Wednesday revealed Fed officials’ view that the job market would improve further and that inflation would begin to move toward their 2 percent annual target.

They took note of the U.S. economy’s resilience through a summer of financial market turbulence and felt that global threats had “diminished.”

The Fed has kept its benchmark for short-term rates near zero since late 2008.

In the end, the Fed at its Oct. 27-28 meeting left its key rate unchanged but said further progress could justify a December hike. Officials in the minutes stressed that no decision had yet been made.

When rate increases do begin, they will occur at a gradual pace, officials reiterated in the minutes. Most economists are forecasting a small quarter-point rate hike in December.

The wording in the October statement marked the first time in seven years of ultra-low rates that Fed had ever suggested that it might raise rates at its next meeting.

The minutes showed that Fed officials debated whether to insert the “next meeting” phrase into the statement. A couple of officials worried that it might be signaling too strongly the possibility of a December rate hike.

However, most members felt the new wording would underscore that they had not made a decision on a rate hike but that “it may well become appropriate” to start raising rates in December if the data show the economy performing as expected.

Fed officials were encouraged by the “solid pace” of consumer spending in the third quarter and generally expected further moderate gains in coming months, according to the minutes.

The October meeting came after a disappointing September jobs report which was noted in the minutes. But since then, the job market surged in October, with employers adding 271,000 jobs, the most this year.

“Dec. 16 is a very, very live date for action, and frankly, given the stellar 271,000 jobs report since the October meeting, we would be astounded if they don’t raise rates finally,” said Chris Rupkey, chief financial economist at MUFG Union Bank in New York.

In recent weeks, a number of Fed speakers have said that a rate hike in December was on the table.

In congressional testimony on Nov. 4, Yellen called a December rate hike a “live possibility” if the economy stays on track. William Dudley, president of the Fed’s New York regional bank, seconded that view in a separate appearance that same day.

In a speech last week, Loretta Mester, president of the Fed’s regional bank in Cleveland, said that she believed the time to hike rates was “quickly approaching” and argued that waiting too long to begin raising rates could allow inflation to take hold.

US Producer Prices Drop in Latest Sign of Tame Inflation

Jeffrey Lacker, president of the Fed’s Richmond bank, said in a CNBC interview on Wednesday that he believed that any economic impact from the terror attacks last week in Paris would be temporary. He said he had not changed his view that the central bank needs to start raising rates.

Lacker cast the lone dissenting vote at the October and September meetings, arguing in favor of rate hikes at both of those meetings.