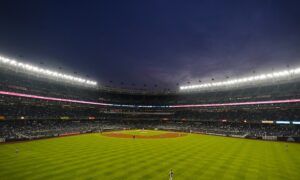 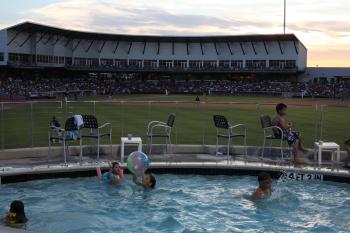 I am sure all you baseball aficionados know about the New York Yankees, the L.A. Dodgers, and the Boston Red Sox. Well then, tell me what you know about the Grand Prairie AirHogs, Wichita Wingnuts, or the Lincoln Saltdogs. These are just three of the ten teams that play in the new independent baseball league known as the American Association.

Alex Rodriquez, Ken Griffey Jr., and Derek Jeter are known by legions of fans everywhere. But the Sioux Falls Canaries have the slugging Beau Torbert who leads the league in homeruns with 18 while driving in 62 RBIs.

Baseball fans in El Paso love their Diablos. They say the name of Jusef Frias with reverence. Although Jusef was born in the Bronx, New York, this border town has adopted him as one of their own, and he has a Mexican food appetite to prove it.

Although the St. Paul Saints only have a stadium capacity of 7,000, they average over 6,000 fans per game. Attendance has been growing, with their last game setting an attendance record with 7,012. With another month of baseball ahead, the American Association is nearing an attendance mark of 1,000,000 fans.

Even cities that have a major league franchise are attracting minor league clubs. In Dallas, home of the mighty Texas Rangers, there are three minor league clubs. The Fort Worth Cats and the Grand Prairie AirHogs represent the American Association while the Frisco Rough Riders play in the Texas League. There is talk, and even some planning, to bring in two more minor clubs to the Metroplex by 2010.

The American Association was first formed as an independent league in 1902. In 1903, the association joined the National Association of Professional Baseball, and for the next half century, the league was arguably the most influential minor league in all of baseball.

The American Association struggled and died only to be resurrected again over the next several decades. Each time major league baseball aligned the minor league teams, scores of other minor leagues would fold.

Finally, on October 11, 2005, the American Association was formed again. The recent additions of two teams from Wichita, Kansas, and Grand Prairie, Texas, added even more brightness to the league’s future.

On March 2, 2007, a proposition in Grand Prairie, Texas, was announced to fund a ballpark. A one-eighth cent sales tax was proposed to fund the park. On May 12, the proposition was put up for a vote and it passed. By July 5, 2007, the team had been named the “AirHogs” and construction on the $18 million, 5,445-seat facility had begun. In October, former Texas Ranger Pete Incaviglia was named the AirHogs’ first manager. On May 16, 2008, the AirHogs played their first home game in QuickTrip Park at Grand Prairie.

Having a small town with a minor league team has become quite fashionable, not to mention making good economic sense. The AirHogs of Grand Prairie employ 12 people full time and over three hundred during the season. They sell millions of dollars in merchandise and food yearly while giving the local community an extra hit with name recognition and self-awareness, not to mention tax revenue.

With the slowing American economy and the affordable price of AirHog games—$10 can get you a seat just about anywhere you want, whereas even the cheapest seats at a Rangers game are $12—it's no wonder minor league ball has taken off in Texas.

“Grand Prairie has been a great community for the AirHogs to play in this year,” said Dave Burke, General Manager of the team. “Attendance has been super and the city is a good partner for us to work with.”

To the north of Dallas, the Frisco Rough Riders average more than 10,000 fans per game. Texas alone has more than 20 minor league clubs.

A Night to Remember

We sat quietly for a few minutes, seated toward the back of the stands on a hot Texas night, just looking out over the excited crowd. We watched fans scurry for foul balls with gloved hands, as families interrelated with shouts partially muffled by hot dog-filled mouths splashed in Dr. Pepper.

A young couple near the third base side embraced and kissed with as much enthusiasm as the kids in the crowded swimming pool just beyond the right field fence. A grandfather caught a foul ball and gave it triumphantly to a grandson. Burke smiled, saying, “It is a great night for baseball.”