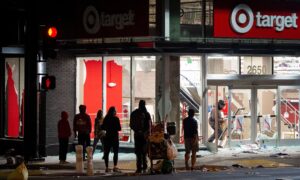 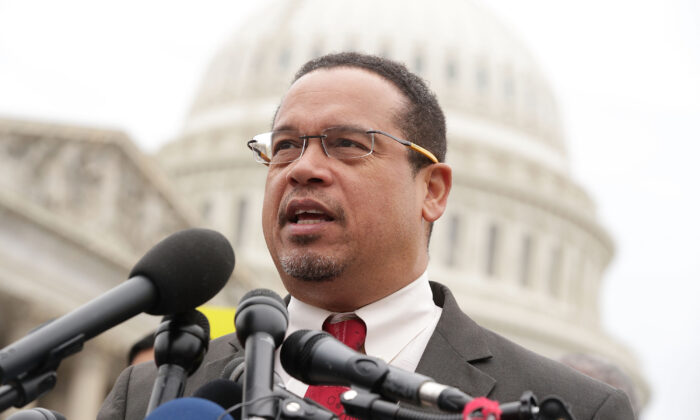 In a press conference, Walz said protesters across the United States had made it “very clear” that “they don’t trust the process, they don’t believe justice can be served, and their frustrations are that they believe time and time again that the system works perfectly well as it was designed: to deny those rights and deny justice to communities of colour.”

In an effort to get “trust restored,” Walz designated Ellison, a former Democratic congressman, as the lead prosecutor on Floyd’s case, noting that he has the experience needed to lead the prosecution.

Ellison, elected to the attorney general post two years ago after serving as a U.S. representative for four terms, in 2018 posted a photograph of himself holding “Antifa: The Anti-Fascist Handbook.”

His son, Jeremiah Ellison, also recently came out in support of Antifa, the far-left group that President Donald Trump plans to designate as a terrorist organization.

Ellison said on Sunday he that “with a large degree of humility and a great seriousness, I accept for my office the responsibility for leadership on this critical case involving the killing of George Floyd.” He added: “We are going to bring to bear all the resources necessary to achieve justice in this case.”

Ellison will be assisted by Hennepin County Attorney Mike Freeman in any cases arising from the death of Floyd.

“This case is unusual because of the way that Mr. Floyd was killed and who did it: at the hands of the defendant, who was a Minneapolis police officer,” Ellison said. “Prosecuting police officers for misconduct, including homicide and murder, is very difficult. And if you look at the cases that have been in front of the public in the last many years, it’s easy to see that is true. Every single link in the prosecutorial chain will come under attack as we present this case to a jury or a fact-finder,” he added.

Floyd’s death last week sparked nationwide protests against police brutality, many of which have escalated into violence and looting, and several states across the country have called in the National Guard to assist law enforcement in keeping protests at bay.

Floyd, 46, was arrested by police outside a south Minneapolis grocery store on Memorial Day for alleged fraud. A citizen’s cellphone video showed an officer—who has since been identified as 44-year-old Derek Chauvin—kneeling on Floyd’s neck for almost eight minutes as Floyd repeatedly said he couldn’t breathe and begged officers not to kill him. He eventually became unresponsive, with one witness noting that his nose was bleeding. The footage spread quickly on social media.

The father of two was pronounced dead May 25 after he was taken into custody by authorities and on May 26, Officers Chauvin, Thomas Lane, Tou Thao, and J. Alexander Kueng were fired from the Minneapolis Police Department.

Chauvin was also arrested and has been charged with third-degree murder and manslaughter. He is scheduled to make his first court appearance on June 8 in Hennepin County Court.

During Sunday’s press conference, Ellison said the state is not ready to announce any other charges against the other police officers.

“It’s just too early,” he said. “Dose of reality, prosecuting police for misconduct including homicide and murder is very difficult.”