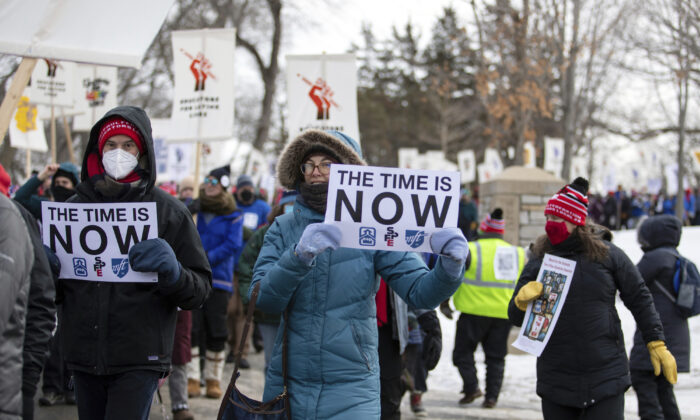 A new agreement between the Minneapolis teachers union and Minneapolis Public Schools that could result in white teachers being laid off before minority teachers, regardless of seniority, has sparked criticism among experts.

According to the agreement (pdf), initially struck in March, white teachers would be laid off or reassigned before “educators of color” in the event Minneapolis Public Schools needs to reduce staff, under a section called “educators of color protections.”

The agreement states that past discrimination by the school district “disproportionately impacted the hiring of underrepresented teachers in the District” compared to the relevant labor market, and that this resulted in a lack of diversity among teachers.

“Language which refers to this Article will no longer be in effect once the teachers in the District reflect the diversity of the labor market and the community served by the District,” it adds.

Specifically, the new agreement states that if a teacher who is a member of an underrepresented population is subject to “excess”—meaning there will be a reduction in staff at a particular school rather than a district-wide layoff—then the district must instead eliminate the position of a white teacher with the “next least” seniority.

The move will ultimately allow schools to bypass the previous seniority-based layoff system through which teachers who had been employed for the least amount of time would typically be the first to be laid off.

The agreement was reached following a three-week teachers’ strike in March, and the clause is set to go into effect in spring 2023.

However, the move has sparked a backlash among lawyers and experts who have called it a “gross violation” and “unconstitutional,” while some anticipate the matter could make its way to the Supreme Court.

Minnesota Republican state Rep. Jeremy Munson wrote on social media that he hasn’t always been in favor relying solely on seniority during layoffs, instead prioritizing job performance and the value employees bring to an organization.

“The Minneapolis teachers Union has taken a racist approach and agreed to protect your job based on your skin color, over your job performance or seniority,” Munson stated. “I don’t know who needs to hear this, but racist employment contracts have no place in our society.”

Harmeet Dhillon, CEO and founder of the Center for American Liberty and a trial lawyer at Dhillon Law Group in San Francisco, wrote on Twitter on Aug. 16 that any Minneapolis teacher laid off out of order of seniority because of their race should hire a lawyer, because the policy is illegal.

Kimberly Hermann, general counsel for the Southeastern Legal Foundation, told Fox News that the Supreme Court has been “crystal clear” in saying that public schools cannot terminate teachers based on their skin color. The move is “unconstitutional, illegal, and sets our country back decades in race relations,” she stated.

In an Aug. 16 Twitter post, Jonathan Butcher, an education fellow at The Heritage Foundation, wrote that the new policy violates Title VII of the Civil Rights Act and the equal protection clause of the Constitution.

“Research finds significant learning loss due to pandemic school closures. School officials should be focused on helping children succeed in school & in life, not be obsessed with a radical political agenda,” Butcher wrote.

Despite the backlash, the school district defended the decision in a statement to multiple media outlets.

“To remedy the continuing effects of past discrimination, Minneapolis Public Schools and the Minneapolis Federation of Teachers (MFT) mutually agreed to contract language that aims to support the recruitment and retention of teachers from underrepresented groups as compared to the labor market and to the community served by the school district,” the statement said.

Minnesota Public Radio reported in March that the school district was facing a $22 million budget deficit in the 2022–2023 school year, and that layoffs or school closures were likely on the horizon.