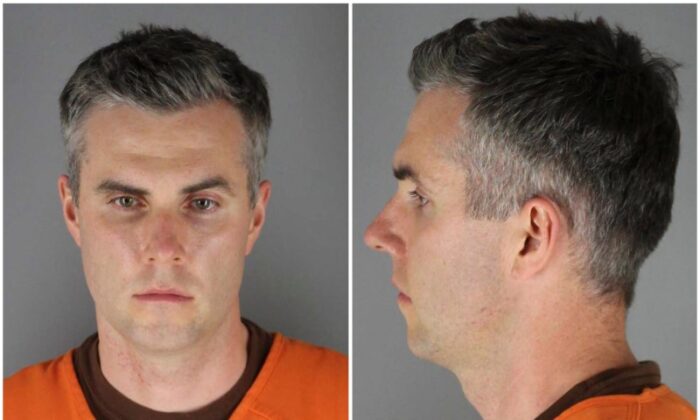 Former Minneapolis Police Officer Thomas Lane was sentenced to 30 months in prison in a federal court on Thursday morning for depriving George Floyd of his constitutional rights, the Justice Department (DOJ) announced.

Lane, 39, must also serve two years of supervised release as part of his sentence.

He is one of four former Minneapolis police officers who were convicted earlier this year in connection with Floyd’s death in 2020.

Prosecutors had asked U.S. District Judge Paul Magnuson to sentence Lane to between five and a quarter to six and a half years in prison, while Lane’s attorney has asked for 2 and a quarter years, the Associated Press reports.

Magnuson told Lane: “the fact that you did not get up and remove Mr. Chauvin when Mr. Floyd became unconscious is a violation of the law” but also pointed out that he had received 145 letters supporting Lane, adding that he had never received so many on behalf of a defendant.

Lane was a rookie officer on his fourth day on the job when Floyd died. Magnuson noted that the Minneapolis Police Department had sent him out with another rookie officer on the call that ended in Floyd’s death.

The judge said he will recommend that Lane serve his sentence at the Duluth minimum-security federal prison camp located about 2 1/2 hours from the Minneapolis area.

“The tragic death of George Floyd makes clear the fatal consequences that can result from a police officer’s failure to intervene to protect people in their custody,” said Assistant Attorney General Kristen Clarke for the Justice Department’s Civil Rights Division in a statement on Thursday.

“Had this defendant and other officers on the scene with Derek Chauvin taken simple steps, George Floyd would be alive today. This sentence should send a message that protecting people in custody is the affirmative duty and obligation of every law enforcement officer, regardless of one’s rank or seniority.”

Lane was convicted in February of depriving Floyd of his constitutional right to be “free from a police officer’s deliberate indifference to serious medical needs” when the former police officer saw Floyd restrained and in police custody while “in clear need of medical care.”

Prosecutors said Lane “willfully failed to aid” Floyd, a 46-year-old black man who died after former Minneapolis police officer Derek Chauvin held his knee against his neck and back for approximately nine-and-a-half minutes while Floyd laid handcuffed and face-down on the pavement.

The arrest came after Floyd allegedly tried to use a counterfeit $20 bill to purchase cigarettes before being arrested by officers.

Lane had restrained Floyd’s lower body during his arrest.

The same jury that convicted Lane earlier this year also found former officers Tou Thao and J. Alexander Kueng guilty of depriving Floyd of his constitutional right to be free from an officer’s unreasonable force.

Lane’s sentencing comes nearly 26 months to the day that Floyd was murdered which sparked protests across the country as demonstrators called for racial justice and police reform.

State prosecutors and the defense jointly recommended a sentence of three years, to be served concurrent with Lane’s federal sentence for violating Floyd’s civil rights.

U.S. Attorney Andrew Luger for the District of Minnesota said that Lane had known that Floyd was in grave need of medical care on the day that he died but that he instead “chose passivity rather than action.”

“As a sworn law enforcement officer, he failed to uphold his duty to step in and save a man’s life,” Luger added.