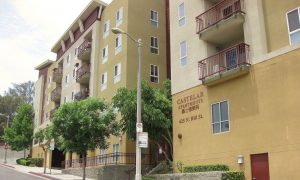 Minimum Wage Increase in California Helps Some, Hurts Others

According to the Living Wage Calculator by MIT, a living wage for one adult in Los Angeles County is $11.37 an hour. For two adults and two children, at least one adult has to make $22.95 an hour.

Bob Valdez used to work for minimum wage a few years ago and knows how hard it is to pay the bills with such an income.

“I know the cost of living is going up here in the state of California, so a lot of people need that boost,” he said.

He now works as store manager for Rocket Fizz in Sherman Oaks, Calif., a chain with at least 40 locations across the nation.

He said the company already pays employees above minimum wage, but as labor and other costs keep rising, they will have to generate more business to make up for it.

Stuart Waldman, president of the Valley Industry and Commerce Association (VICA), said increasing minimum wage naturally causes the cost of living to go up and can hurt businesses.

“One of our VICA members who owns a restaurant, everyone who works for him asked for a raise, not just the people who are getting minimum wage, so he’s had to give everyone a dollar raise. It’s a pretty significant hit for him. About $72,000 a year is what it’s going to end up costing him, so he’s had to reduce hours for a lot of his employees,” he said.

Waldman said other rising costs for businesses, such as employee health care, are increasing the strain.

He said the end result is that some people will end up losing their jobs altogether.

“When you talk to people, having an extra dollar or two in their pocket is great if they get to keep their job, but there are a lot of people who are going to end up losing everything,” he predicted.

When President Obama talked about raising the minimum wage for federal employees to $10.10 an hour, the Congressional Budget Office released a report in February estimating it could lead to as many as 1 million workers losing their jobs.

On the other side of the debate is Arindrajit Dube, an economist with the University of Massachusetts–Amherst who released a study last December estimating that a $10.10 minimum wage could bring roughly 4.6 million Americans out of poverty. Over time, the study states, that number could grow.

For better or for worse, California’s minimum wage will further increase to $10 an hour starting Jan. 1, 2016.