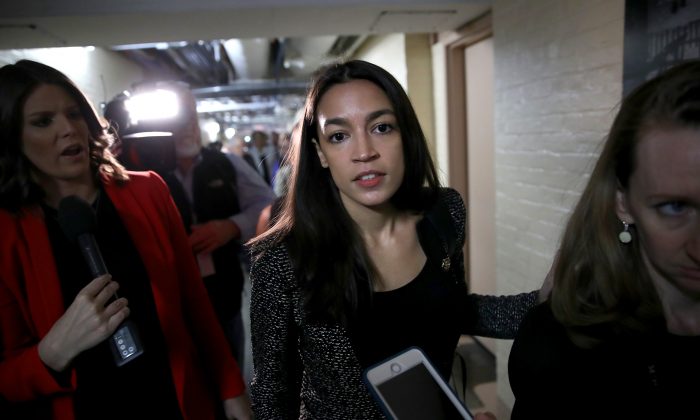 Rep. Alexandria Ocasio-Cortez (D-N.Y.) answers questions from reporters as she leaves a House Democratic caucus meeting in Washington on May 22, 2019. (Win McNamee/Getty Images)
US News

‘Mini AOC’ Account Shut Down by Family Over Death Threats

The social media account of an 8-year-old girl—known for her parody impersonation videos of Rep. Alexandria Ocasio-Cortez (D-N.Y.)—has been shut down by her family after they received death threats and repeated incidents of harassment.

Ava Martinez, the young girl behind the “Mini AOC” account, went viral for her videos, but according to her stepfather, the abuse they received became too much.

Salvatore Schachter said he was forced to shut down all social media accounts associated with Martinez “for our safety and for our child’s safety,” in a July 3 announcement.

“Ava will not being doing any more MINI AOC content,” he said on Twitter. “The Left’s Harassment and death threats have gone too far for our family. We have been getting calls on our personal phone numbers.”

Ava will not being doing any more MINI AOC content.

The Left’s Harassment and death threats have gone too far for our family. We have been getting calls on our personal phone numbers.
For our safety and for our child’s safety, we deleted all Mini AOC accounts.

In a televised appearance in May, Martinez told Fox Business that she started doing the videos because her father and her uncle encouraged her, citing her resemblance to Ocasio-Cortez.

Her stepfather told Fox News that the negativity “became too much” for them to handle after Martinez reenacted “previously unpublished” photographs of Ocasio-Cortez visiting the southern border last year.

Schachter said the harassing comments against them were becoming “increasingly personal, dark, and dangerous,” in the aftermath of the reenactment.

Martinez understands why the account had to be closed, Schachter said.

“She’s disappointed at not doing Mini AOC going forward but we explained that this is for the best and she’s okay with it,” he said.

Her family members said they had one message to their harassers from the political left.

“The world has seen Ava’s beauty, talent, and charm, which was the whole reason for Mini AOC to begin with and no amount of hate or anger will change that,” Schachter told Fox News. “Also, like Ava says, ‘try using your words.'”

Current and past immigration officials recently came out to reject a series of accusations made by Cortez where she claimed illegal immigrants are subjected to “inhumane” treatment and are told to “drink out of the toilets.”

Following a high-profile visit at several border facilities in Texas on July 1, Ocasio-Cortez has made a number of accusations about the condition of the detention facilities and its detainees.

“They are not drinking out of the toilet—no Border Patrol agent is going to make anyone drink out of the toilet,” Homan said during his appearance on July 2. “It’s just ridiculous on its face.”

He explained that the holding cells at the facilities have an apparatus that is comprised of a sink and toilet that uses two separate water lines.