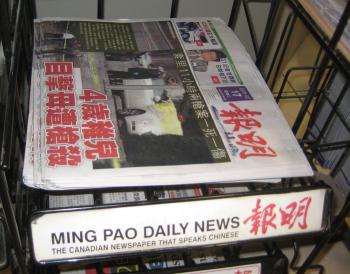 Following on the heels of the closure of its eastern U.S. edition at the end of January, the Chinese newspaper Ming Pao Daily News is now folding its western U.S. operations based in San Francisco.

The closure came about because Ming Pao has been “deeply affected” by the economic crisis, according to a notice posted on its website. The notice said that a free newspaper published by Ming Pao in San Francisco would also stop publishing on February 14. Over 50 staff were let go.

It is currently unknown whether Ming Pao‘s Hong Kong, Vancouver, and Toronto editions are also in danger of closing.

According to an Oriental Daily news report, the paper’s headquarters in Hong Kong has said that Ming Pao has been losing money on its overseas editions for years. Calls requesting comment from Ka-ming Lui, Ming Pao‘s CEO for North America, were not returned by deadline.

Ming Pao, whose parent company is Media Chinese International Ltd, established its Toronto and Vancouver editions in 1993. Its New York edition began in 1997 and the San Francisco edition in 2004.

Of the major Chinese newspapers in the U.S.—The Epoch Times, World Journal, Sing Tao Daily, and Ming Pao Daily News—Ming Pao has been the only one to go under.

In October 1995 Ming Pao was bought by Datuk Tiong Hiew King, a wealthy Malaysian merchant who had close business ties with China. According to a report by the Jamestown Foundation , a Washington-based think tank, Ming Pao has since been “heavily influenced” by the Chinese regime, as have World Journal and Sing Tao Daily.

“Employees at Ming Pao‘s New York office have told sources that their “true boss” is none other than the Chinese Consulate [in New York], and that they are obligated to do whatever the Consulate asks,” said the report.

Before 1985, Chinese media operations in the United States came primarily from Taiwan and Hong Kong, with little influence from the Chinese regime.

However the report found that in the mid-1980s, when increased immigration from China changed the profile of the Chinese-American community, the regime made “aggressive media efforts” to control overseas Chinese newspapers, television stations, and radio stations.

This was achieved in a number of ways, including using economic ties to influence independent media who had business relations with China, purchasing broadcast time and advertising space, providing free, ready-to-go programming and contents, and deploying government personnel to work in these media, achieving influence from within their ranks.

“This leverage has had major effects on the contents of broadcasting and publishing, effectively removing all material deemed “unfavorable” by the Chinese government,” stated the report.

Chinese officials who have defected have made similar observations. Chen Yonglin, a former Chinese diplomat who defected to Australia in 2005, has said that companies with business ties to China are pressured to advertise with these media, many of which are struggling financially.

Satisfied with its control of Chinese media, the regime is now looking to extend its influence to Western mainstream media.

The Epoch Times reported recently that at the Chinese Communist Party’s (CCP) Political Bureau Central Committee meeting in late January, Party officials decided it was time to set their sights on Western news outlets and plans were announced to make substantial investments in overseas propaganda efforts.

It was suggested that funding for Chinese media be reduced while continuing to maintain control through advertising. Additional funds are to be used to buy western media through agents.

A report by the CCP’s Intelligence Agency analyzed the increasing financial difficulties that many Western media outlets are facing during the current economic crisis. It came to the conclusion that the time is ripe to begin attempting to acquire these outlets without it being seen as a political move.