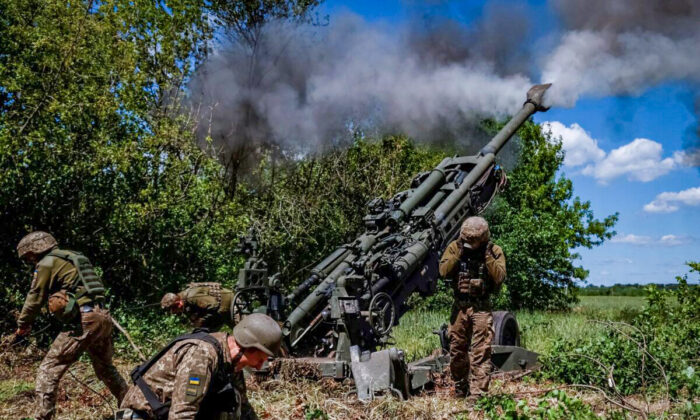 Ukrainian service members fire a shell from a M777 Howitzer near a frontline in Donetsk Region, on June 6, 2022. (Stringer/Reuters)
Russia-Ukraine War

Miners Rescued After Being Trapped Underground in East Ukraine: Separatists

Seventy-seven miners were rescued on Saturday after being trapped underground during a power outage and Ukrainian’s shelling of territory controlled by pro-Russian separatists in eastern Ukraine, local officials said.

The miners were underground when power was lost in the Zasyadko coal mine in Ukraine’s Donetsk region but all were now safe and no one was injured, according to a statement by local separatist officials.

The pro-Russian separatist authority in the self-proclaimed Donetsk People’s Republic blamed Ukrainian forces for the shelling. Reuters could not immediately verify the report and there was no immediate reaction from Kyiv.

The separatists seized large swaths of land in the Luhansk and Donetsk regions of eastern Ukraine in 2014, and proclaimed two self-styled people’s republics there. Russia has recognized them as independent states but they are considered part of Ukraine by Kyiv and the United Nations.