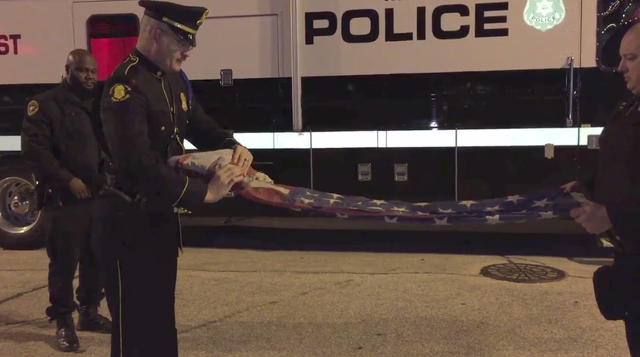 A protester burned and stomped on an American flag outside the Republican presidential debate in Milwaukee on Nov. 10, and police responded in a unique way.

Milwaukee police officers were photographed and captured on video folding a flag that was burned during the demonstration.

Thousands of people congregated in downtown Milwaukee for the debate, demonstrations, and a Milwaukee Bucks game. Police spotted a man burning an American flag before putting it out with a fire extinguisher.

Later, police handled the flag and held a small ceremony to properly fold the flag before placing it on inventory.

The Milwaukee Police Department posted the photos on Facebook.

“Milwaukee Police Officers, seeing the burning flag in the crowd, immediately grabbed a fire extinguisher to put out the flames. The plume from the fire extinguisher prompted reports of tear gas being used. These reports were false,” the statement reads.

The protester may face “possible charges” for the flag burning.

“Our officers engaged with this crowd in a restrained manner,” Milwaukee Police Chief Edward Flynn told the Milwaukee Journal-Sentinel. “They recognized that as obnoxious as it can seem, flagburning is protected speech. The question is, is it endangering the third parties, and that’s what we’re acting upon.”

It’s not clear what group the flag burner belonged to, but Reuters reporter Brendan O’Brien pointed out the flag burning on Twitter.

Burning the U.S. flag is widely considered disrespectful, but it’s protected by the First Amendment of the U.S. Constitution.