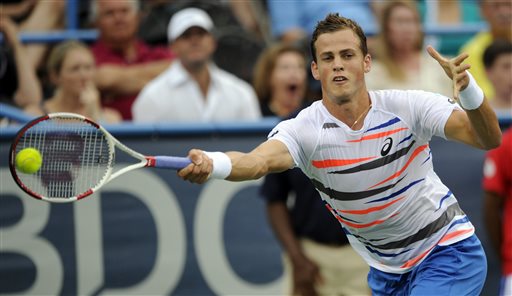 Vasek Pospisil, of Canada, reaches for the ball against Richard Gasquet, of France, during a match at the Citi Open tennis tournament, Saturday, Aug. 2, 2014, in Washington. (AP Photo/Nick Wass)
Sports

It’s an all-Canadian final in the 2014 Citi Open as Milos Raonic takes on Vasek Pospisil on Sunday afternoon.

The pair are scheduled to face off in Washington D.C. at 3 p.m. EDT.

The match will be broadcast on ESPN2 in the United States and Sportsnet 360 in Canada.

Live streaming will be available through both broadcasters as well as the ATP’s Tennis TV.

Pospisil is ranked No. 13 in the tournament and ranked No. 36 worldwide.

But Raonic got his first win against Pospisil later that year in Lexington in two sets, and won the last match between the two, at the Rogers Cup in 2013. That match was a close, three set affair in the semifinals.

No Canadian has ever won the Citi Open singles, also known as the Washington Open–indeed, before this year, none had made it to the final match.

“The vibe that I get is that tennis is really growing right now in Canada,” Pospisil said. “I feel like people are getting really excited about it, especially with the results of Canadian players this year.”

On a muggy evening, Pospisil fell behind 3-0 in the third set, before pulling even at 3-all. Then he was two points from losing while trailing 5-4. But Pospisil came back to hold serve there, then broke in the next game when Gasquet’s signature backhand broke down and produced three errors.

Pospisil dropped his racket on the court behind the baseline and raised his arms after ending the match by serving it out at love, including a pair of aces at 124 mph (200 kph) and 128 mph (206 kph). He reached his first career final — and won for the second time Saturday.

About 7 1/2 hours earlier, Pospisil finished off a rain-interrupted 6-7 (4), 6-3, 6-4 quarterfinal victory against 10th-seeded Santiago Giraldo of Colombia. That match was suspended Friday night, two points into the third set.

“Generally, I do a good job (of) fighting in matches and not letting go of any match,” Pospisil said. “It was a little bit tougher today, because I was feeling pretty heavy legs in the third set (against Gasquet), and I wasn’t feeling physically, like, sharp.”

Raonic advanced by beating Donald Young of the United States 6-4, 7-5.

At Wimbledon last month, Raonic was a semifinalist in singles — the first man from Canada to get that far at a major tournament — while Pospisil paired with Jack Sock of the U.S. to win the men’s doubles title. Also at the All England Club, another Canadian, Eugenie Bouchard, got to the women’s singles final.

Raonic and Pospisil have known each other for years.

Since the Canadians have also played each other multiple times over the years, Pospisil already knows what Young learned Saturday about Raonic’s dangerous serve.

Powered by serves that reached 143 mph (231 kph) and resulted in 15 aces, Raonic reached his first final of the season. He won 34 of 37 first-serve points and never faced a break point.

“Against a player like that, with a serve like that, it’s only going to be small windows,” said Young, a 25-year-old from Atlanta. “And you have to be there to take advantage and be ‘Johnny on the spot’ — and I wasn’t able to do that today.”