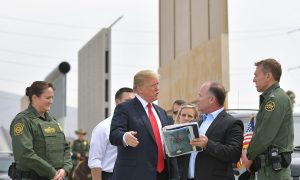 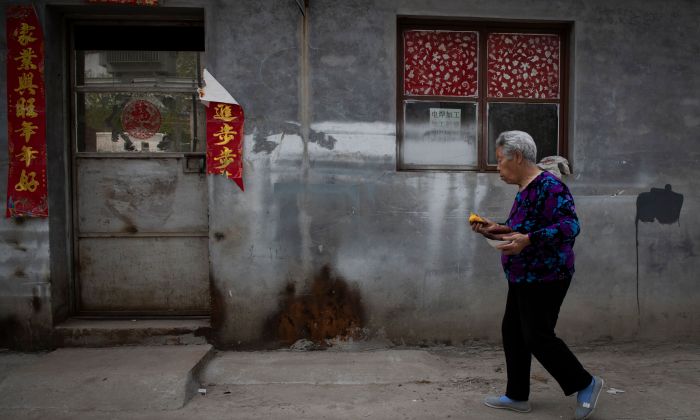 An elderly woman walks on a street while eating and holding a plate with sweet potatoes on the outskirts of Beijing on April 17, 2019. (NICOLAS ASFOURI/AFP/Getty Images)
China Society

After the Chinese regime promoted the option of reverse mortgage loans to elderly citizens in August 2018, more and more predatory loan companies have sprung up. Many have lured elderly into their trap, leading them to owe millions of yuan within a short period of time.

Reverse mortgages allow homeowners to convert their home equity into cash, while no monthly mortgage payments. Borrowers can then take out the funds however they choose. This is a popular option among seniors to obtain a steady source of income in their final years.

In China, companies such as Zhong’an Minsheng have taken advantage of this popularity to scam elderly.

These companies make false claims of being able to secure loans for these elderly and convince them to sign over their homes. The mortgage contracts in fact contain high interest rates.

The companies then threaten the elderly that they will collect on the loans, by gluing the locks of their doors, or throwing human feces on their front doors.

Some seniors were forced to hand over their houses, leaving them without a place to live.

Lu Fengming, 69, has been living in the Tiantongyuan Residence Community, located in the Changping district of Beijing, with her husband for dozens of years.

“In about one month, I couldn’t eat and sleep normally because they [people from loan company] asked me to pay back the principal and interest. I felt a huge pressure,” Lu told Chinese state-run broadcaster CCTV on May 25.

In the CCTV report, Lu explained that a loan company called Zhong’an Minsheng advertised that it was endorsed by government authorities, including the Ministry of Civil Affairs and China National Committee on Ageing, an agency under the cabinet-like State Council.

“The government’s support made us trust the company,” Lu said.

CCTV reported that Zhong’an Minsheng did not in fact have any relation to these government agencies.

But in July 2016, several local media reported that officials from the National Committee on Ageing and an official from the Communist Youth League’s Central Office were among the cadres who attended the opening ceremony of a Zhong’an Minsheng operating center. The report was deleted in March this year.

Zhong’an Minsheng claims on its website that it is a middleman company that supplies reverse mortgage loans to the elderly. The company has seven operating centers in the Changping, Haidian, Huairou, Tongzhou, and Pinggu districts of Beijing, as well as an eighth center in Yanjiao town of Hebei Province, close to Beijing.

The operating centers offer free singing, dancing, calligraphy, and painting classes to attract elderly to visit them, then uses the chance to introduce reverse mortgage loans.

The company does not offer the loans itself but instead partners with more than ten small loan companies in the Beijing area. Those companies are essentially loan sharks that charge exorbitant interest rates, as much as 24 percent per year, which is 5.57 times the standard loan interest rate in China, 4.31 percent per year.

Wu Lan, 59, told the state-run Beijing News in April that because she enjoyed singing, she attended free classes at a Zhong’an Minsheng operating center in 2017. The singing teacher also promoted the reverse mortgage loan product during the classes.

Soon, Wu and her husband handed ownership of their two houses to Zhong’an Minsheng after signing contracts.

Zhong’an Minsheng then applied for mortgages for the two houses from a small loan company, and received 4.71 million yuan ($680,000) in cash. The company used the cash to pay Wu’s family 23,000 yuan every month, until this past February.

When Zhong’an Minsheng could no longer give out their elderly customers’ monthly fund payments, the loan companies forced the elderly to pay the interest and principal.

In reality, the company operated a pyramid scheme, whereby they would attract more customers to sign away their homes, get the home equity, then use it for other customers’ fund payments.

In February, Zhong’an Minsheng could no longer pay its customers after it was unable to attract any more new ones. The loan companies asked the elderly to pay their interests.

The trial loan is for those 60 years-old and older, Based on an estimate that they would pass away at 86 years-old, the equity would be divided into monthly payments to the elderly customer. When the senior dies, the loan company will take the house away.

The trial only attracted 139 customers to participate within four years.

Despite the government trial not being successful the CBIRC released a notice on August 8, 2018 to encourage all Chinese elderly to reverse-mortgage their houses.

Cheng Xiaonong, independent economist based in the United States, told the Chinese-language Epoch Times in an interview that the Chinese regime’s motivation for promoting this product was for the elderly to support themselves financially rather than asking the government for pensions and other benefits.

Xia Yeliang, a researcher at U.S. think tank Cato Institute, explained to the Chinese-language Epoch Times that Beijing is currently running out of funds for its pension program.

249 million Chinese, or roughly 18 percent of China’s population, was older than 60 years-old at the end of 2018. The burden of the country’s pension program is set to become a serious economic problem.