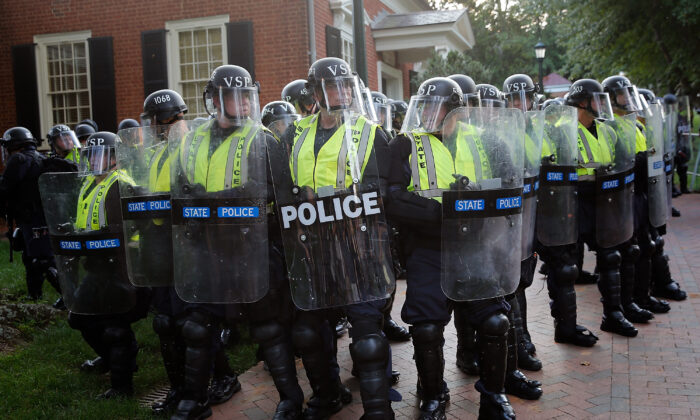 Members of the Virginia State Police stand guard in riot gear on the campus of the University of Virginia during an event in Charlottesville, Virginia on Aug. 11, 2018. (Win McNamee/Getty Images)
By Bowen Xiao

NEW YORK—College campuses across the United States that stifle free speech, a right protected by the First Amendment, are an ongoing issue that continues to be thrust into the national spotlight—and has also caught the attention of the Oval Office.

About 6.4 million students across the nation have their free-speech rights restricted at institutions of higher learning, according to a Dec. 4 report from the Foundation for Individual Rights in Education (FIRE)—a nonprofit, nonpartisan organization founded in 1999.

Legal experts and constitutional scholars told The Epoch Times that the free speech rights of college students have indeed been threatened across the United States. They say that college campuses generally claim freedom of speech only when it fits their agenda, and indicate that administrative policies at educational institutions need to change.

Authors of the study investigated the written policies at 471 of the United States’ top colleges and universities, as to how much they protect or didn’t protect First Amendment rights. FIRE found 89 percent of U.S. colleges still hold policies that “restrict, or could too easily be applied to restrict student expression.”

Laura Beltz, the lead author of the study and a senior program officer of policy reform at FIRE, told The Epoch Times that the number of institutions that restrict free speech is alarming. FIRE rated almost a quarter of institutions examined in the report with their “red-light” rating for maintaining speech codes that both “clearly and substantially” restrict speech. The group has released its annual “Spotlight on Speech Codes” report on the state of free speech since 2006.

“Colleges should serve as centers of intellectual debate and inquiry, but if you have policies telling you can’t protest unless you submit a request two weeks in advance, or you can’t use words that other people find offensive, that ends up being impossible,” she said.

Colleges or universities that earned a “yellow-light” rating from FIRE tripled in recent years, from 21 percent in 2009 to 64 percent in their latest report. Yellow-light ratings are given to policies that are less restrictive than red-light ratings, but still “prohibit or have an impermissible chilling effect on constitutionally protected speech.”

Some of the worst examples of such policies that were implemented by schools include the banning of university resources, such as computers, if used in a “harassing, offensive, profane, or abusive manner.” The ban at Murray State University claims that the perception of the person affected is a “major factor” in deciding if the action violated their policy.

“That so many schools limit free speech through their written policies is of great concern,” Beltz said. “All schools earning our ‘yellow-light’ or ‘red-light’ rating must revise policies so that they better meet First Amendment standards.”

Beltz said the most grievous policies limiting free speech were implemented at the University of Southern California, which forced students wanting to stage a demonstration to complete a permit application at least two weeks in advance.

Meanwhile, the number of institutions earning a “green-light” rating, FIRE’s highest rating in which no written policies had compromised student expression, reached 11 percent (50 schools)—up from only 2 percent in 2009. More than 6.4 million students attend colleges that are rated yellow or red. And for the first time, more than 1 million students are now enrolled at green-light rated institutions, according to the group.

Matt C. Pinsker, a constitutional law professor at Virginia Commonwealth University and an attorney, told The Epoch Times that the First Amendment has “increasingly come under attack on college campuses.”

“The reality is that no one has ever been in danger and these speech codes are really a way to limit the expression of ideas which conflict with leftist political agendas,” he said. “It is putting feelings ahead of facts.”

“While the trend lately has been getting worse, where this is going is either it will blow back on universities and reverse itself, or this will become new normal,” Pinsker said.

The Justice Department, meanwhile, on Dec. 9 issued a rare statement of interest in support of a former college student who sued his school over speech codes that deny students their First Amendment rights on campus.

Professors and lawyers said the college campus environment shouldn’t be a partisan battleground, but instead a place of learning.

Andrew Selepak, a media professor at the University of Florida, told The Epoch Times there are legal limits to free speech such as inciting violence or engaging in libel, but in a class environment, it’s important to learn different perspectives—even if the professor or students disagree personally.

“The college classroom is not a political debate waged against the beliefs of some, but a civil discussion of the merits to an argument or position,” he said. “As a media professor, I taught my students that a reporter should be objective and equally report both valid sides to an issue. The same should be true of college professors.”

When student’s freedom of speech is restricted on campuses, college administrators are encouraging students to keep a closed mind, Andrew Jezic, an attorney and founding partner of Jezic and Moyse LLC, told The Epoch Times.

“[It is] essentially saying that they should not be subjected to the ideas of people they don’t agree with,” Jezic said via email. “This creates a rift where every group thinks their ideology is flawless, and nobody is willing to consider that their opinion might not be correct.

The 1964-65 University of California, Berkeley, protests involving students demonstrating against the university’s administration, which had banned political activities on campus at the time, spurned on a “crucial, ongoing conversation about speech rights on American college campuses ever since,” D. Gilson, an author and writer for ExpertInsuranceReviews.com who has taught writing and popular culture studies at the university level for more than a decade, told The Epoch Times.

Gilson said that First Amendment rights are complicated on college campuses, in part due to some schools being public, which requires the school to offer “absolute rights to its community members,” while private schools are allowed in some circumstances to curtail those rights.

Almost 92 percent of surveyed private institutions fall short on promises to protect the free speech rights of their students, according to Beltz.

The debate surrounding the silencing of conservative voices on campuses has also ramped up in recent years due to a number of high-profile cases in which conservative speakers were heckled or forced to cancel their events at colleges such as UC Berkeley and Middlebury College in Vermont.

Beltz said while protesters have the right to protest against speakers invited to speak at college campuses, they shouldn’t be able to physically disrupt or prevent the event from occurring.

“Disrupting a speaker infringes on the rights of students who have invited that speaker to come and speak,” she said.

Beltz suggested that students who take issue with a speaker could instead plan a counter-programming event that rebuts the speaker’s ideas; attend the event but take part in a non-disruptive protest inside the event such as wearing a T-shirt with a protest message or turning their backs to the speaker silently, or to ask questions during a Q&A session at the event to get their message out and challenge the speaker’s ideas.

Over the years, the number of red-light ratings has reduced, and Beltz attributes that to a combination of factors, including successful litigation that has overturned restrictive policies, state legislation that bans certain restrictive policies like free-speech zones, and policy reform work with schools by groups such as FIRE.

Free-speech zones are limited areas where students are allowed to speak or protest, often about political matters, and exist in certain colleges and universities across the United States. According to FIRE, these zones, in practice, “function more like free speech quarantines, banishing student and faculty speakers to outposts that may be tiny, on the fringes of campus, or (frequently) both.”

“By treating campus expression as something to be hidden, regulated and monitored instead of encouraged and celebrated, colleges and universities that exile expressive activity to ‘free speech zones’ teach students the wrong lesson about life in our liberal democracy,” FIRE stated in a blog post earlier this year.

Paul Engel, an author who has spent 20 years researching the constitution, told The Epoch Times that the ability to peacefully disagree with others and express oneself is “part of what keeps liberty alive in America.”

“Sadly, college campuses and public discord in general, seem more than willing to claim freedom of speech when it fits their agenda, but few seem to have been taught the responsibilities that come with such freedoms.”

Stifling free speech on college campuses will place students down the wrong path in the future according to Engel, who has spent more than 20 years studying and teaching about the Constitution. He questioned how people could possibly discover the truth if they weren’t allowed to debate differing points of view.

“Rather than protecting students, restrictions of free speech on campus makes them unable to function in a free society where they will be exposed to ideas they do not like or do not agree with,” he said.

“We are already reaping the whirlwind of these ideas where science cannot be questioned, viewpoints are met with violence, and even the freedom of this publication to print what it sees fit may one day be curtailed,” he said. “Until we as a people are prepared to allow others the freedom of speech we wish for ourselves, that freedom will be a pale imitation of what was once one of the most cherished freedoms in America.”

President Donald Trump signed an executive order on March 21 that instructed colleges across the nation to protect free speech on their campuses—or else risk losing federal research funding.

The order directs 12 federal grant-issuing agencies to ensure that schools abide by the First Amendment. The White House Office of Management and Budget also will work to ensure institutions that receive the grants “promote free inquiry through compliance with all applicable federal laws, regulations, and policies,” a senior Trump administration official told reporters in a conference call.

“We’re here to take historic action to defend American students and American values—they’ve been under siege,” Trump said in the East Room before signing the order. “Universities that want taxpayer dollars should promote free speech, not silence free speech.”

Pinsker said he agrees with Trump’s executive order in that schools that don’t protect the principle of free speech of all students—whether right-wing or left-wing—shouldn’t receive federal tax dollars.

“Why should American tax dollars be going to schools which do not embrace the American principles of free speech and simultaneously violate the rights of its students?” he said.

FIRE, in a statement following Trump’s order, said it would watch closely to see if it would “further meaningful, lasting policy changes that FIRE has secured over two decades.”

Trump said his policy will send a powerful message to “professors and power structures” that want to keep young Americans and the general public “from challenging rigid, far-left ideology.”

Trump’s order applies to certain education grants and won’t affect federal financial aid that covers tuition and fees for students. Specifics on how the federal government will enforce the order are still being developed.