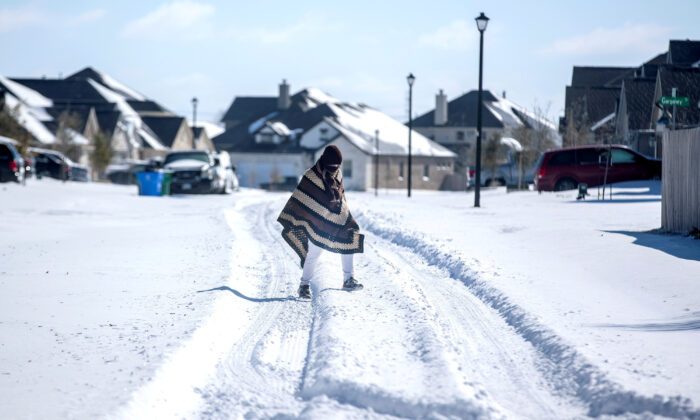 A man walks to his friend's home in a neighbourhood without electricity as snow covers the BlackHawk neighborhood in Pflugerville, Texas, on Feb. 15, 2021. (Bronte Wittpenn/Austin American-Statesman/USA Today Network via Reuters)
US News

Millions of Thanksgiving travelers may have to contend with wet and snowy weather as they head to their destinations for the holidays this week, according to the Weather Prediction Center (WPC).

In its Nov. 22 weather bulletin, the center said holiday travelers will be thankful as Thanksgiving week kicks off on a “tranquil note across much of the Lower 48 states.”

However, the tranquil weather will later give way to an “active period” for portions of the Southern Plains and Mississippi Valley by midweek.

More than 53 million Americans are expected to travel this Thanksgiving, an increase of 13 percent from last year, bringing fall travel back to pre-pandemic levels. According to the American Automobile Association, 48.3 million travelers are expected to reach their destinations via automobile and 4.2 million by plane.

With 6.4 million more people traveling this Thanksgiving, along with the recent opening of the U.S. borders to fully vaccinated individuals, travelers are warned that roads and airports may be much more crowded.

Wet and snowy conditions are expected in the Northwest, which could see up to several inches of snow in the mountains. Meanwhile, snow showers are likely to be seen in the Great Lakes region. Scattered rainfall and thunderstorms will also begin over the Southern Plains and the Mississippi Valley by evening Nov. 24, and chilly temperatures are expected in the East.

“The departures of a pair of cold fronts in the East will usher in a period of cooler weather across the eastern third of the country over the next couple of days as high pressure settles over the region,” WPC said in its bulletin.

“A shift to northwesterly winds across the Great Lakes will generate Lake effect snow showers through Tuesday afternoon before winds shift again ahead of an approaching system. First freeze potential exists over parts of the interior Southeast tonight and Tuesday night as temperatures are expected to drop to between 15–20 degrees below average in some places, which may lead to impacts to sensitive soils/crops.”

Meanwhile, forecasters at the National Weather Service predict that weather conditions “should cooperate” with travelers heading out ahead of the Thanksgiving holiday, but a cold front could slow down holiday plans for those in the Central and Eastern states, beginning Thanksgiving Day. The Pacific Northwest will also see periodic bouts of rainy and wet weather.

“The cold front will leave the East Coast on Monday, bringing rain from the southeastern coast to parts of eastern New England. This will also bring strong wind gusts through the Great Lakes, the Southeast and Northeast U.S.,” the agency said.

Some airports along the East Coast, mainly in the mid-Atlantic, could see wind-related delays at times, according to the service.