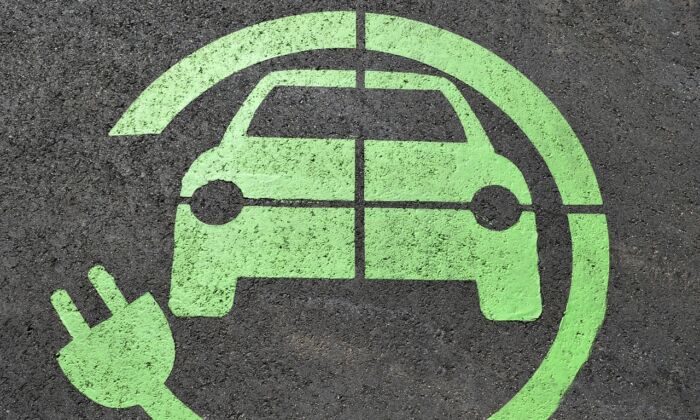 A charging sign for electric vehicles (EVs). (paulbr75/Pixabay)
US

Millions of Electric Car Batteries Retiring by 2030, Are We Ready To Deal With What Could Be Ticking Time Bombs?

The evolving landscape of lithium batteries is creating both contradictions and infrastructure hurdles that, according to some, need to be addressed sooner rather than later. A critical component of this is waste management.

More than 6 million electric vehicle (EV) battery packs will end up as scrap between now and 2030, and the recycling and reuse industries are racing to keep up. Some researchers project that recycling alone will be an over $12 billion industry by 2025.

U.S. President Joe Biden wants to make America a key player in the EV battery industry with a $3.1 billion spending package for automobile production to transition away from fossil fuels.

Much of this dream is pinned on a dusty stretch of soil in the Nevada high desert called Thacker Pass. It serves as the lynchpin in Biden’s push for increased domestic lithium production and more EV batteries. That’s because Thacker Pass is the largest hard rock lithium reserve in the United States.

Currently, China dominates the world’s EV battery production, with more than 80 percent of all units developed there.

Yet while Biden’s administration has its sights on the top spot for EV battery production, insiders are pointing out industry trapdoors.

Due to the potentially dangerous chemistry of lithium-ion EV units, concrete solutions are needed before an avalanche of dead battery packs ends up sitting around and waiting for recycling like ticking time bombs.

Those working on the sales end of the EV revolution tend to squirm or offer vague generalities when queried about what will happen to all of the old batteries.

The notion is quickly lumped into the very broad category of recycling or second life applications without offering any planning details.

Second life applications are an option for EV batteries no longer fit to power cars, but are suitable for alternative uses like energy storage.

And while that’s a start, the ultimate question lingers: How can America effectively deal with millions of completely spent, defective, or recalled EV units?

For people who specialize in hazardous waste, handling lithium batteries is a serious subject.

“For me, the biggest challenge I see, especially with second life, is on the safety side,” Scott Thibodeau at Veolia North America told The Epoch Times.

Thibodeau is the general manager of environmental services and solutions at Veolia North America, the second largest hazmat removal service in the United States.

He explained the chemistry of lithium-ion batteries is problematic since they can’t be dumped or recycled as easily as some other materials. This requires particular adaptations within the evolving EV industry to responsibly strip, package, and dispose of old units.

“The packing and logistics isn’t easy or cheap,” Thibodeau said.

Tucked within the sprawling Chicago suburbs is the town of Morris, Illinois. Around midday on Jun. 29, 2021, the fire department received a call that a warehouse fire had broken out in a structure that many residents assumed was just an abandoned building. The call came from someone who claimed to be an employee for a company that was storing 200,000 pounds of batteries in the building, most of which were lithium.

Fire Chief Tracey Steffes told reporters that it was the first time his department had ever fought a lithium fire.

Mitigating traditional fires is done by using water or chemicals to cut off the supply of oxygen. However, lithium is unique in that it doesn’t require oxygen to burn. Once ignited, it creates what Thibodeau called a “thermal runaway,” which is incredibly challenging to control.

“Once the battery goes into that state, stopping it is next to impossible,” Steffes said to reporters after the June 2021 fire.

Confused Morris residents were quickly evacuated from neighborhoods close to the blaze and spent hours in hotel rooms, watching smoke fill the sky, and fearing for the safety of their homes.

At that moment, residential Americans got an up close and personal look at lithium’s dark side.

It wasn’t the first incident where lithium battery storage turned catastrophic, and it likely won’t be the last.

Thibodeau says that while there’s no easy way to put out a lithium battery fire, having people properly trained on how to reduce the fire risks, combined with proper handling and storage, is a huge step in the right direction.

Recycling EV batteries poses another significant hurdle. That’s due to a trifecta of complications including expense, existing capacity to handle demand, and the simple fact these batteries aren’t easy to recycle.

“Currently, less than five percent of lithium batteries that reach the end of their lifespan are recycled,” a spokesperson for the carbon accounting group Greenly told The Epoch Times.

The representative for Greenly went on to explain that though the potential for ramped up recycling exists, it’s not possible with lithium-ion batteries until they reach the end of their lifespan.

“The industry hasn’t obtained the knowledge or experience necessary to learn how to recycle these batteries or maximize their usage beforehand,” they added.

This is where second life applications come in, which can buy a non-defective EV battery an extra 10 years of life. It also essentially buys the burgeoning recycling companies time to catch up.

But some experts say the demand for recycling could outstrip the supply capacity.

Gunaseka’s company offers seabed mining as an alternative to traditional mineral extraction methods. He says mining for lithium will continue until 2050, or until there are enough scrap batteries for harvesting to propel the industry’s soaring demand.

That means new minerals to make more EV batteries while the old ones eventually burn out—and pile up somewhere—until possibly 2050.

“New mining needs to increase five times to enable the move from hustle fuels to clean energy. Only seabed battery metals can deliver this material without the massive ESG [environmental, social, and governance] impact,” Gunaseka said.

And Thibodeau says there are still high operating costs to consider.

It can cost up to $300 per metric ton of “black mass paste” that comes into a recycling facility. Even after removing profitable metals, there’s operational overhead, safety regulations, equipment, and employee salaries to deal with.

Yet there’s no clear spending outline for the recycling industry at all.

“The second biggest challenge is managing and mitigating costs of recycling and repurposing,” Thibodeau said, adding, “The industry needs take-back laws, landfill bans, and streamlining to get it from point A to point B.”