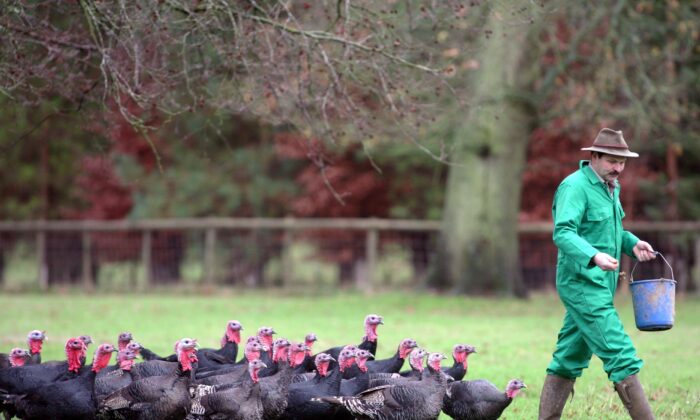 Millions of Britons Could Face ‘National Shortage’ of Turkeys This Christmas

Millions of Britons could face a “national shortage” of turkeys, toys, and trees this Christmas due to a lack of skilled European employees following Brexit, according to the chair of a farming association.

The Road Haulage Association (RHA) last month said the UK is facing a shortage of around 100,000 HGV drivers, which along with Brexit, has been further exacerbated by people leaving the industry as well as the pandemic, which halted driver training and testing for nearly a year.

As a result, food supply chains have been drastically disrupted, leading to shortages across some UK supermarket shelves.

Kate Martin of the Traditional Farm Fresh Turkey Association (TFTA) told the PA news agency that Christmas could see a “national shortage” of turkeys on the UK’s supermarket shelves, driven by the declining supply of skilled European workers.

While small British farms that use local workers have been less affected by the undersupply, supermarkets are likely to see the worst of it, the TFTA said.

“This year it’s looking like there is a national shortage of turkeys when we’re talking about supermarket shelves, rather than buying direct from your farm,” Martin said.

“It is the supermarket shelves that will be emptier on turkeys this year than they have been before, only because there have been less turkeys placed on the ground, only because the big processers know that they will not get them processed.”

The TFTA, a group of independent family-run farms producing free-range Christmas turkeys, said some poultry farms have already had five times more orders this year than they did at the same time last year.

When asked whether supermarkets will completely run out of turkeys—a staple across Britain for every classic Christmas dinner—Martin urged consumers to “get their orders in very quickly.”

“We have seen an absolutely unprecedented number of orders come in. Come Christmas, if you leave ordering your turkey from your local farm supplier, you are going to be out of luck.”

Martin noted that Brexit was partly to blame for the potential national shortage, although the UK has been facing long-term issues with vacancy numbers amid an ageing workforce, low wages, and poor truck stop conditions.

“We’re small producers, we use local labour, but for the big processors it is 100 percent caused by a labour shortage,” she said.

“This situation with turkeys is caused by the fact that European labour is no longer available to us, and they are skilled workers who have been coming to us for years.

“People are now missing a whole host of their workforce that they have been training and investing in over the last however many years, and those workers are no longer available for us to use on a seasonal basis—they will go find work on mainland Europe instead.”

Last week, the government announced a temporary visa scheme that will see 5,000 HGV drivers and 5,500 poultry workers brought in on three-month contracts to keep supermarket shelves stocked with turkeys and tackle fuel delivery difficulties, which have prompted chaotic scenes and lengthy queues at petrol stations after a shortage of fuel tanker drivers.

In addition, up to 4,000 people will be trained as new truck drivers, and nearly 1 million letters will be sent out to people with HGV licences in the coming days in an effort to entice them to give the job another go.

But British Transport Secretary Grant Shapps told the Mail on Sunday that Brexit was only a “relatively minor contributor” to the shortage of truck drivers in the UK, despite the RHA estimating that Britain’s withdrawal from the European Union led to an exodus of 20,000 hauliers.

Shapps also placed blame on the RHA for the chaotic fuel station scenes, accusing it of leaking comments from BP bosses about supply concerns.

And it’s not just turkeys that might be affected by the potential shortage over Christmas this year.

Mark Rofe, who owns ChristmasTrees.co.uk, told the Evening Standard last week that around one tenth of the real Christmas trees sold in the UK are imported, but post-Brexit regulations and higher prices could lead to shortages.

Rofe said UK growers were already experiencing growing demand for locally grown trees, “especially from clients who would usually import their trees from Europe, but are keen to avoid any red tape that could increase costs or cause delays for what is of course a highly seasonal and time-sensitive business.”

Meanwhile, toy retailers face rising shipping costs into the UK from manufacturers in Asia who have been hit by supply-chain disruptions, while COVID-19 lockdowns across much of the continent left ports paralysed.