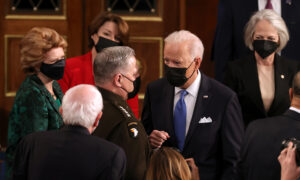 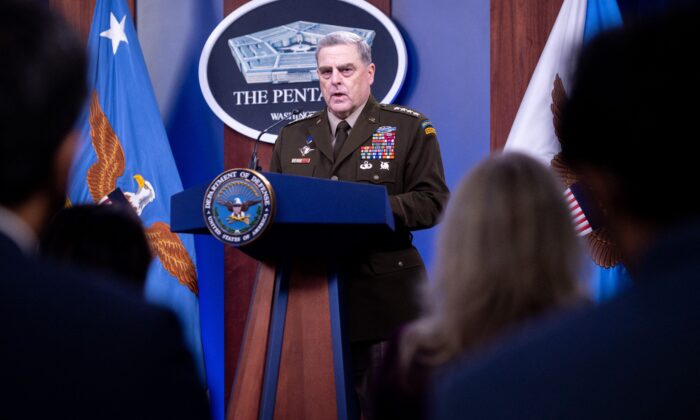 U.S. Army General Mark Milley, Chairman of the Joint Chiefs of Staff, holds a press briefing about the U.S. military drawdown in Afghanistan, at the Pentagon in Washington, on Sept. 1, 2021. (Saul Loeb/AFP via Getty Images)
US-China Relations

Chairman of the Joint Chiefs of Staff, Gen. Mark Milley, could have jeopardized the national security of the United States in allegedly secret calls to Gen. Li Zuocheng of China’s People’s Liberation Army (PLA), according to former U.S. military officers. Milley also overstepped his own authority while allegedly discussing the launch of nuclear weapons with senior military officials, they say.

According to a new book titled, “Peril,” Milley called Li once in October 2020 and another time on Jan. 8 to assure him that the United States wouldn’t attack the Chinese Communist Party, and if it was poised to attack, he would alert his counterpart.

“General Li, you and I have known each other for now five years. If we’re going to attack, I’m going to call you ahead of time. It’s not going to be a surprise,” Milley reportedly said.

Milley made those calls, the book has alleged, because he was fearful that then-President Donald Trump would carry out military action during the waning days of his presidency.

Some U.S. lawmakers have described Milley’s actions as treasonous, saying the general overstepped his authority, and have called for President Joe Biden to fire Milley. Biden, in response, has backed the general.

Retired U.S. Navy Cmdr. Kirk Lippold, who was the commanding officer of the USS Cole when it was attacked by al-Qaeda terrorists in 2000, said he was incredibly concerned about Milley’s allegedly secret conversations with Li.

That the nation’s top military officer has not denied any of the allegations, but defended his conversations, has shocked Lippold, who told The Epoch Times, “Milley may have purposefully—or inadvertently—created a window of strategic vulnerability.”

Milley has since described the calls as “routine” and “perfectly within the duties and responsibilities” of his job. As chairman, Milley is the top military adviser to the president and to the defense secretary.

Lippold said the call to Li could have easily called into question “America’s resolve and willingness” to safeguard itself and ensure its survival.

The smallest misinterpretation could cause the Chinese regime to believe aggression from the communist-led country would be “met with acquiescence or acceptance from the United States rather than military action and resolve,” Lippold warned.

Having served as a member of the War on Terrorism Division of the Joint Chiefs of Staff, Lippold said that Milley’s call could have “given the Chinese government the impression that the United States was hesitant or, at worst case, unwilling to use nuclear weapons to ensure our national survival.”

According to the new book, Milley on Jan. 8 also conveyed instructions to senior military officials not to take orders regarding military strikes or launching nuclear weapons from anyone without the chairman’s approval.

According to Lippold, it is far outside Milley’s normal chain of command to engage in a conversation about nuclear engagements.

Robert Maginnis, a retired U.S. Army Lt. Colonel and Pentagon analyst agreed, saying, “The chairman is little more than a presidential military adviser, who is prohibited by law from exercising executive authority and does not have nuclear release authority.”

The risks posed by Milley’s calls with Li are heightened given that China is a nuclear-capable nation, according to Lippold. The repercussions of such revelations could have an effect on “the very survival of the United States,” he said.

Nations possess nuclear weapons because their respective governments view them as “the ultimate guarantor of that nation’s survival,” Lippold pointed out. Since World War Two, nuclear weapons have served as a deterrent for wide-scale global conflict.

“The conversation undermined U.S. military credibility and capability by undermining the deterrent effect of U.S. firepower, both conventional and nuclear, that provides for the security of the nation,” he said.

According to Lippold, it is unconscionable for the chairman of the Joint Chiefs of Staff to speak about U.S. military readiness with the top military officer of another nuclear-capable nation, particularly “one that has expansive goals in mind, both regionally and globally.”

The Chinese regime, Lippold said, is “going out of their way to modernize their nuclear triad across the board,” which includes the building up of land-based intercontinental ballistic missile, submarine-launched ballistic missile, and strategic bomber capability.

Lippold called for a thorough accounting of the precise words of Milley’s conversations.

“These types of phone calls are usually very tightly controlled, so there must be an investigation initiated by Congress to get a full accounting of exactly what was said during the course of the conversation,” he said.

“If he intimated or indicated to the head of the PLA what the United States actions or intents might be,” Lippold said, “that would prove to be a very dangerous road to tread down.”

This would amount to a “huge breach of trust,” indicating that Milley is not fit to serve in his role as the principal adviser to the Secretary of Defense and president, Lippold said. If this is found to be the case, then Milley should have the “moral integrity to lay his stars on the table” and resign, he added.

The Joint Chiefs of Staff, which Milley chairs, said in a statement last week that Milley regularly talks with counterparts around the world, including counterparts in China and Russia.

“His calls with the Chinese and others in October and January were in keeping with these duties and responsibilities conveying reassurance in order to maintain strategic stability,” a spokesman for the group said. “All calls from the Chairman to his counterparts, including those reported, are staffed, coordinated and communicated with the Department of Defense and the interagency.”

Trump and other former White House and Defense officials, however, have said they were not informed of the calls.

“The fact that the acting Defense Secretary Christopher Miller was not informed of the call—nor was his staff—indicates that the general had an agenda behind this phone call that was purposefully designed to mislead, or flat out not inform, the chain-of-command of what he was doing and thinking,” Lippold said.

For Milley not to inform his superiors of the calls was “out of the norm” and “completely unprecedented,” according to Lippold. “His chain-of-command should have known everything about these calls—when they were going to be made, what was going to be discussed, and how he was going to frame his words.”

Lippold believes that Milley is “banking on the fact that the American people and Congress do not understand how these types of conversations are conducted.”

“Milley should not be able to have these conversations, couch them in the way he did, calling them ‘perfectly within the duties and responsibilities’ of his job, and get away with it,” he added.

Maginnis said, “If this entire series of events hold true, it is arguably the closest the United States has come to a military coup—and elected leaders must not rest until the country gets answers and all those involved are held to account.”

Milley is expected to appear before a Senate Armed Services Committee on Sept. 28 to speak about Afghanistan, but it is expected he will be forced to field questions under oath about the reports from the book.

“Nothing can be more important than knowing whether or not a top military official committed treason and tried to take control of America’s nuclear arsenal from the former president of the United States,” Maginnis said.

J.M. Phelps
Freelance reporter
Follow
J.M. Phelps is a writer and researcher of both Islamist and Chinese threats.
TOP NEWS