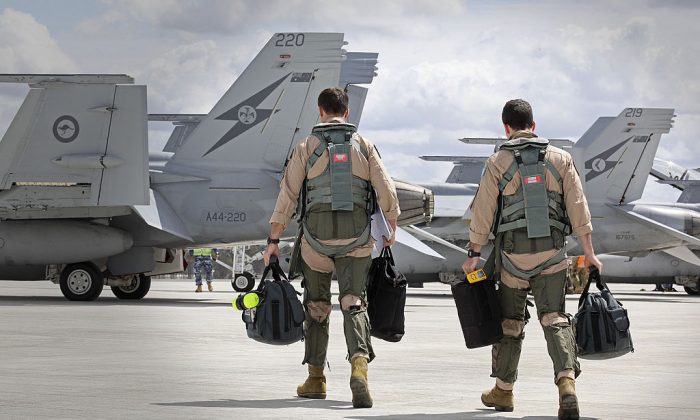 File photo of F/A-18F Super Hornet aircrew members heading to their aircraft in preparation for departure to the Middle East from RAAF Base Amberley on September 21, 2014 in Amberley, Australia. (Photo by CPL Ben Dempster/Royal Australian Air Force via Getty Images)
World

The tropical northern city of Darwin is hosting 4,000 personnel and 140 aircraft over the next three weeks as air forces from around the world take part in Exercise Pitch Black, one of Asia-Pacific’s largest air force training exercises.

Starting on Friday, July 27, the training includes night flying and aerial refuelling, and enables different nations a chance to learn from each other and improve their force integration using one of the largest training airspace areas in the world.

The biennial Pitch Black exercise began in 1990 between Australia and Singapore, and involves conducting battlefield simulations.

“Exercise Pitch Black features a range of realistic, simulated threats which can be found in a modern battle-space environment and is an opportunity to test and improve our force integration, utilising one of the largest training airspace areas in the world — Bradshaw Field Training Area and Delamere Air Weapons Range,” the Royal Australian Air Force said in a statement on its website.