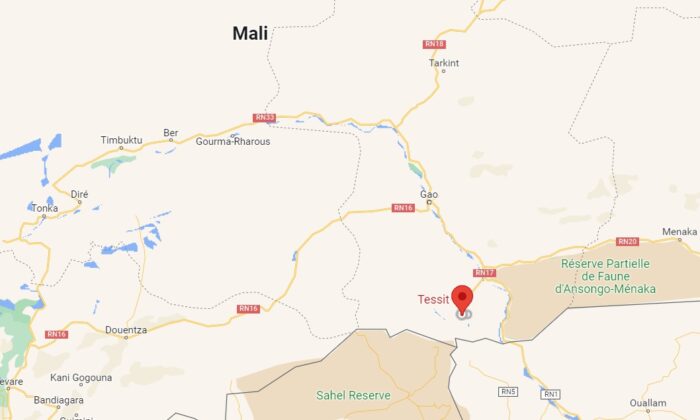 A map shows the location of the town of Tessit, Mali on Aug 09, 2022. (Screenshot/Google Maps via The Epoch Times)
Africa

BAMAKO—Terrorists killed 17 Malian soldiers and four civilians in an attack near the town of Tessit on Sunday, the Malian army said.

Nine soldiers were also reported missing and vehicles and equipment were destroyed, it said in a statement released late on Monday, adding that it suspected an ISIS terrorist group affiliate.

“On 07 August 2022 around 15h00, the army units of Tessit… responded vigorously to a complex and coordinated attack by armed terrorist groups, presumably from ISGS (ISIS in the Greater Sahara) and benefiting from drone and artillery support,” the statement said.

Mali is facing a worsening insurgency by Islamist armed groups, some linked to al Qaeda and ISIS, which has expanded to its neighbors Burkina Faso and Niger.

The army said it killed at least seven on the enemy side.