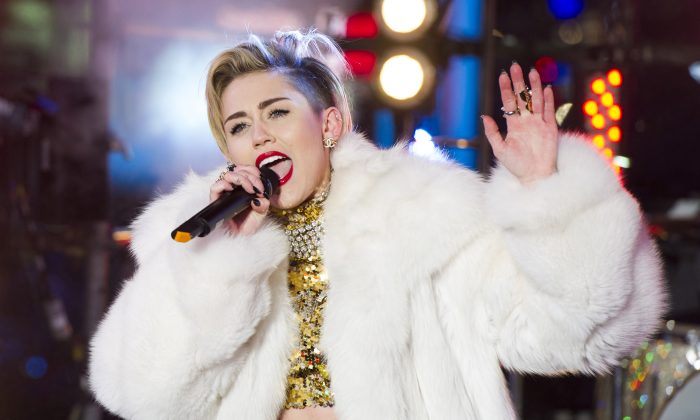 An article saying Miley Cyrus was kicked out of a party after a fight with Ron Jeremy is fake. In this Dec. 31, 2013 file photo, Miley Cyrus performs in Times Square during New Year's Eve celebrations in New York. (Charles Sykes/Invision/AP, File)
Entertainment

Miley Cyrus and been hospitalized again, and has postponed two more concert dates, but users on Twitter are again spreading rumors that she’s on drugs or pregnant. This comes as another Facebook claims that a “sex tape” was released, which is just a scam that directs users to a clickjacking website.

The 21-year-old pop singer’s show Amsterdam on May 2 and her May 4 appearance in Antwerp, Belgium, on her Bangerz tour have been pushed back to June.

The cause of her hospitalization was due to Cyrus’ symptoms over a severe allergic reaction, not because she’s pregnant or on drugs, according to a news release.

Doctors said that she is not allowed to travel.

“After a period of improvement, Cyrus’ symptoms have returned and doctors will not permit her to travel,” a representative for her told CNN Wednesday. “This type of extreme reaction can last up to 27 days and Cyrus must remain under doctors’ care at this time.”

Cyrus went on Twitter and posted a series of crying emoticons. “It’s may 1st April you were a real piece of [expletive],” she wrote.

Cyrus was forced to postpone her U.S. tour until August after treatment for a sinus infection went awry, but expected to be able to keep her European tour on track. The news release says Cyrus still expects to make her London appearance on May 6 as planned. The Antwerp show has been rescheduled for June 20 and the Amsterdam concert will be held June 22.

But on Twitter, people were saying the singer was on drugs, while some were spreading a tabloid cover about alleged drug use.