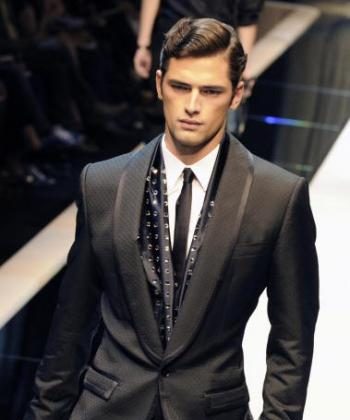 MILAN—Milan's menswear shows kicked off in style on Saturday with Italian designer Giorgio Armani going for classicism and duo Dolce & Gabbana looking for "extreme beauty" for next spring's fashion.

Their shows were among the first of some 40 catwalk runs during Milan's spring/summer 2010 menswear fashion week, which runs until Tuesday and comes amid hopes for a recovery for the Italian sector, hit by the global financial crisis.

Fitted suits were chequered or striped, in greys, light brown or in pale, luminous colours, teamed with loose shirts.

The 74-year-old, who last month said he was recovering from hepatitis, coupled sky blue patterned tops with plain white suits. He also brought out some denim designs, giving a lighter touch to casual suits, sometimes with waistcoats.

Italy's most famous designer duo said they paid homage to the "hedonistic beauty of a sartorial suit studied to its finest detail" from the proportions of the lapel to the fabric.

Their blue and black jeans were ripped all the way down, revealing a second layer of material. Brazilian model Jesus Luz — whose name has been linked to singer Madonna — led models in black embroidered jackets and smooth trousers for evening wear.

British design house Burberry turned to the "British town and country under British rain and sun" for next spring.

Creative Director Christopher Bailey topped slim dark trousers with trenches, macs and jackets — some heavier than others, with details such as double collars or cape-like shapes.

He went for pastel colours for lighter jackets and added trench-like straps to tops. He accessorised with large bags.

"I wanted to start the show with rain and end with sunshine. I think it's a nice analogy of what the whole world is going through as well," Bailey told Reuters backstage.

Some even had a harness-like coat carrier, made up of belts and worn over the shoulder. Chief Executive Gildo Zegna told Reuters the consumption had changed during the crisis.

"Men are going for a more decontracted, soft look and this is why we had a very luxury casual fashion show," he said.

After a "frosty" start to 2009, Italy's National Chamber of Fashion says positive signals are emerging, with 15 percent more collections this week compared to the January winter shows.