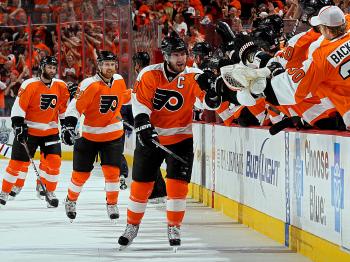 LEADING BY EXAMPLE: Mike Richards celebrates with teammates after scoring the equalizer in the first period. (Jim McIsaac/Getty Images)
Hockey

By Rahul Vaidyanath
Print
The Philadelphia Flyers won the battle of Cinderella teams, eliminating the Montreal Canadiens in five games with a tight 4–2 win on Monday at the Wachovia Center.

The Flyers will be going to the Stanley Cup final to face the Chicago Blackhawks with Game 1 on Saturday in Chicago. On Sunday, the Blackhawks completed a sweep of the San Jose Sharks.

“It’s incredible. We had to win a shootout just to get in [to the playoffs] and now we’re in the Stanley Cup final,” said Simon Gagne. “It’s unbelievable.”

“Nobody gave us much of a chance,” said Danny Briere. “We always had confidence in [goalie] Michael Leighton. He’s a big goalie who takes up a lot of room.”

The victory was also special for tough guy Ian Laperriere, who blocked two shots late in the third period to stymie the Habs.

“It’s taken me 15 years to get here. So many emotions. For two weeks, I thought my season was over,” said Laperriere.

The Habs got off to a great start as Brian Gionta gave them the lead after only 59 seconds of play. That’s how Montreal accumulated a record of 5–0 when facing elimination—by scoring first.

But the Flyers responded in a devastating manner when captain Mike Richards put a puck into an open net after Jaroslav Halak came way out of his goal to chase down a loose puck only to see it slip by him.

Richards is an expert in scoring short-handed goals and with the Canadiens looking to go up two goals, this short-handed marker got the Flyers going.

The Flyers captain, who had been having a low-key series, to put it mildly, was the game’s first star with a goal and two assists and a +3 rating. With their captain firing on all cylinders, the Flyers are a complete package.

The game turned in the Flyers’ favor in the second period with two goals in 1:24. Montreal head coach Jacques Martin had to call time out to settle his team down.

The return of Jeff Carter seemed to be what Richards needed to get going. Carter scored Philly’s third goal after hard-nosed checker Arron Asham scored a nifty second goal.

Montreal closed the gap to one goal when Scott Gomez converted P.K. Subban’s pass. The Habs then had a four-minute power play when Subban was clipped with Chris Pronger’s high stick.

But the Flyers weathered the storm and the Canadiens took a bad penalty deep in the Philly zone to nullify the man-advantage.

Montreal’s inability to score on the power play was also their downfall. They went 0–6 in Game 5.

“We have to look at how they played defensively and on special teams,” said Martin in an interview with RDS. “In this series, the Flyers had the advantage.”

“I’m proud of how we competed. We really saw the character of our players. I want to thank our fans for their terrific support.”

Philadelphia will be in their first final since 1997 when they were swept by the Detroit Red Wings.

Richards had no problem picking up the Prince of Wales trophy, which is typically not touched due to a long-standing superstition.

“They didn’t touch it in Chicago, but we said we’d touch it,” said Giroux.